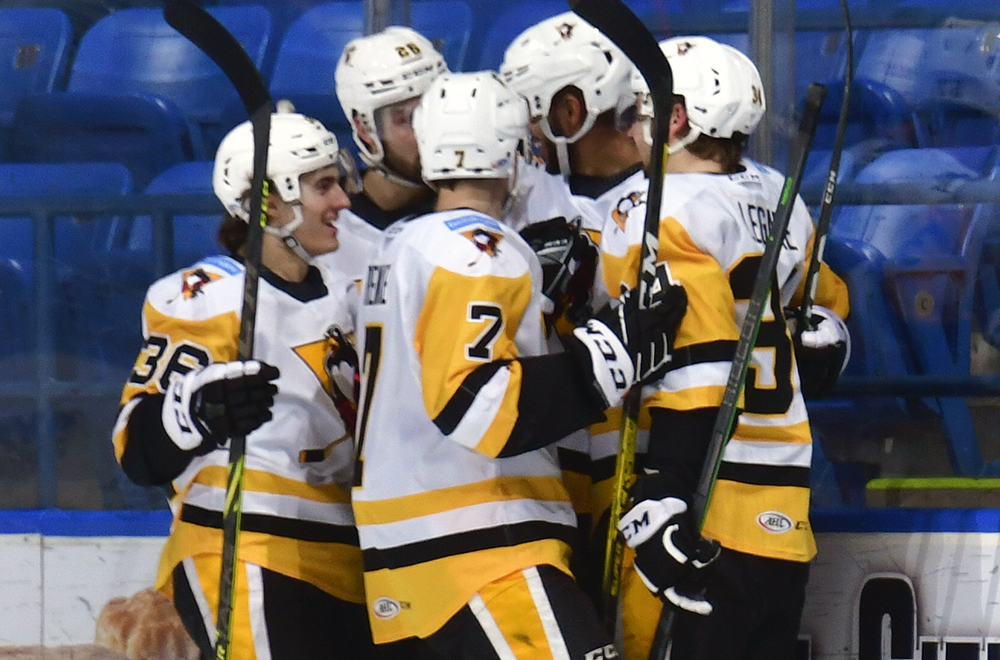 WILKES-BARRE, Pa. – The Wilkes-Barre/Scranton Penguins emerged victorious at the end of a thrilling display against the Springfield Thunderbirds, winning 4-3 in overtime on Wednesday night at Mohegan Sun Arena at Casey Plaza.

Wilkes-Barre/Scranton (17-17-1-3) has now won eight of its last 10 games after Jordy Bellerive delivered the fourth overtime winner of his career at 1:47 of the extra frame.

Springfield seized an early edge, going up 2-0 on goals by a pair of defensemen. Tommy Cross opened the scoring 78 seconds into the game, and Calle Rosén cranked a bar-down slapshot midway through the first period.

The Penguins received a goal from one of their defensemen to pull within one, a highlight-reel tally by Pierre-Olivier Joseph. Joseph went coast-to-coast and accelerated past all four Springfield penalty killers before lighting the lamp with a perfectly placed, sniper’s shot at 17:48.

Neither team scored in the second period, but it didn’t take Wilkes-Barre/Scranton long to do so in the third. Michael Chaput tied the game, 2-2, just eight seconds into the third period.

Jan Drozg gave the Penguins a 3-2 lead at 14:44 of the third period, but the Thunderbirds equalized with an extra attacker when only 41.4 seconds were left in regulation.

Despite the late-game hiccup, Bellerive sent the crowd home happy with a blazing shot past T-Birds goalie Joel Hofer.

Wilkes-Barre/Scranton’s next game is Friday, Feb. 4 against the Bridgeport Islanders, and is also another EYEWITNESS NEWS FAN FRIDAY. Lower-bowl seating will be available for just $16, and select draft beers will be on sale for $2 from 6:30-7:30 p.m. Puck drop between the Penguins and Islanders is  scheduled for 7:05 p.m. at Mohegan Sun Arena at Casey Plaza.

Individual game tickets and partial ticket packages for the 2021-22 season, including 12-game, Flexbook andPremium Seating plans are available by reaching out to the Penguins directly at (570) 208-7367.