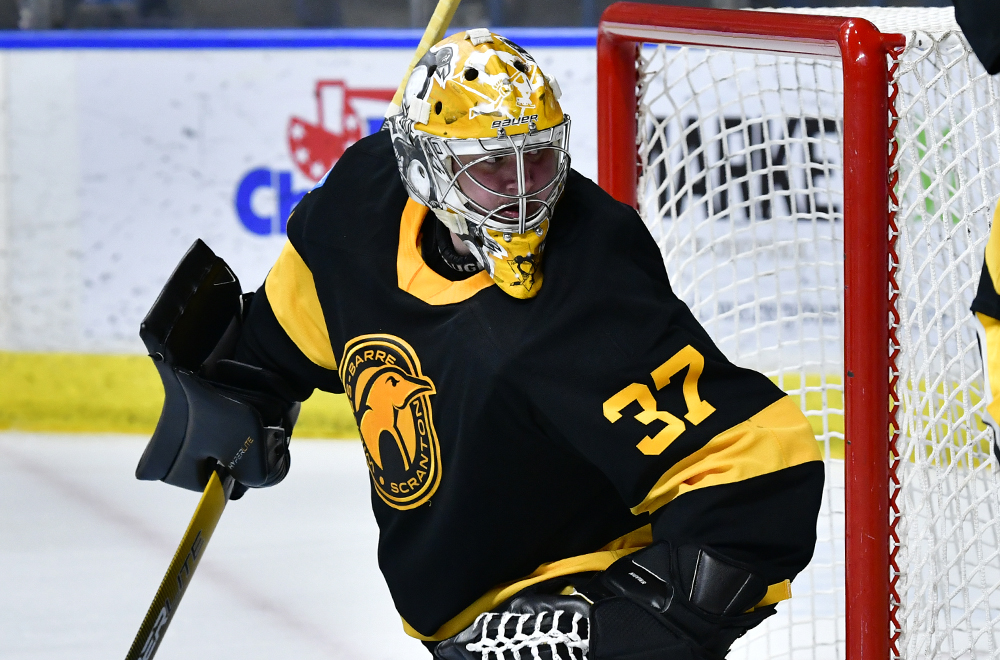 WILKES-BARRE, Pa. – The Wilkes-Barre/Scranton Penguins’ comeback came up short in a 2-1 loss to the Belleville Senators on Friday night at Mohegan Sun Arena at Casey Plaza.

Wilkes-Barre/Scranton (18-19-2-3) threw everything it could at its opponent in the third period, but ultimately couldn’t erase a two-goal deficit. Both goalies put on excellent performances, as the Penguins’ Tommy Nappier and the Senators’ Filip Gustavsson both finished the night with 31 saves.

Belleville opened the scoring at 7:18 with a drive to the net-front by Parker Kelly.

Nappier denied Belleville from point-blank range with a number of athletic kick saves during the rest of the first period as well as early in the second, but eventually, the Senators found twine again. Andrew Agozzino made it 2-0 eight minutes into the middle frame.

The Penguins came out fast and furious to start the third period, working relentlessly to create scoring chances. Their hard work eventually drew a power-play opportunity, on which they converted. Valtteri Puustinen whipped home a one-timer at 7:57 of the third, pulling Wilkes-Barre/Scranton within one.

On a later man advantage, Alex Nylander rang a shot off the crossbar. Shortly after that power play, Gustavsson robbed the Penguins with the toe of his right-leg pad.

Gustavsson continued to whether a 16-shot storm in the final frame of regulation as his team hung on for the win.

Wilkes-Barre/Scranton’s next game is tomorrow, Saturday, Feb. 12, against the Lehigh Valley Phantoms. Puck drop between the Penguins and Phantoms is scheduled for 7:05 p.m. at PPL Center. The Penguins’ next home game will be Saturday, Feb. 19 against the Springfield Thunderbirds. Game time for Penguins vs. T-Birds and Wilkes-Barre/Scranton’s annual Military Appreciation Night will be 6:05 p.m.

KOSTOPOULOS HAS BLESSING FROM BOTH FAMILIES FOR RETURN