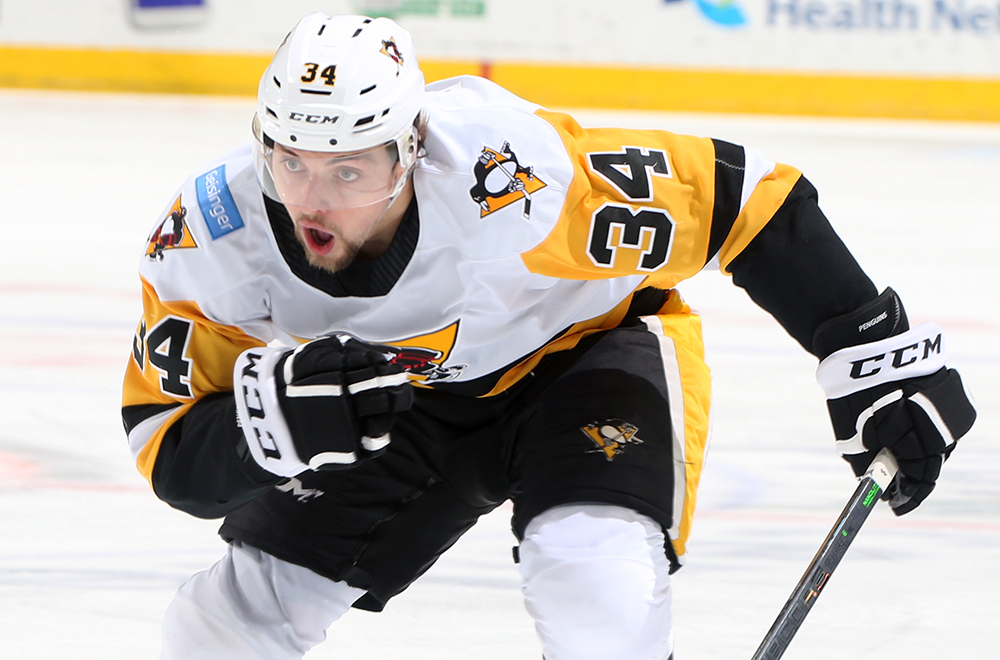 Wilkes-Barre/Scranton (19-19-2-3) controlled the pace of play throughout and utilized a trio of early-period goals to secure the win.

Phantoms goalie Kirill Ustimenko stood on his head in the first period, turning away all 13 of the quality shots the Penguins threw his way. However, Wilkes-Barre/Scranton broke through 51 seconds into the second stanza. Taylor Fedun collected a rebound off of Ustimenko’s pads and rifled it to the back of the net.

Thirty-four seconds after Fedun’s opening goal, Nathan Légaré pulled off a crafty shot to extend the Penguins’ lead to 2-0.

The Penguins continued to pepper Ustimenko, but he kept his team’s deficit at two. The Phantoms gradually found their footing, and eventually got on the board with a snipe from Cal O’Reilly with 3:09 left in the middle frame.

Wilkes-Barre/Scranton wasted little time in reestablishing its two-goal edge in the third period. Pierre-Olivier Joseph sidestepped a Phantoms’ forward at the point and then unleased a laser to Ustimenko’s far side at 2:14. Joseph’s awe-inspiring strike was his eighth goal of the season, tying him for the most tallies by AHL defensemen.

Nappier finished with 20 saves, while Ustimenko denied 32 shots by the game’s end.

Wilkes-Barre/Scranton’s next game is Tuesday, Feb. 15 against the Charlotte Checkers at BoJangels’ Coliseum. Puck drop between the Penguins and Checkers is slated for 7:00 p.m. The Penguins’ next home game will be Saturday, Feb. 19 against the Springfield Thunderbirds. Game time for Penguins vs. T-Birds and Wilkes-Barre/Scranton’s annual Military Appreciation Night will be 6:05 p.m.