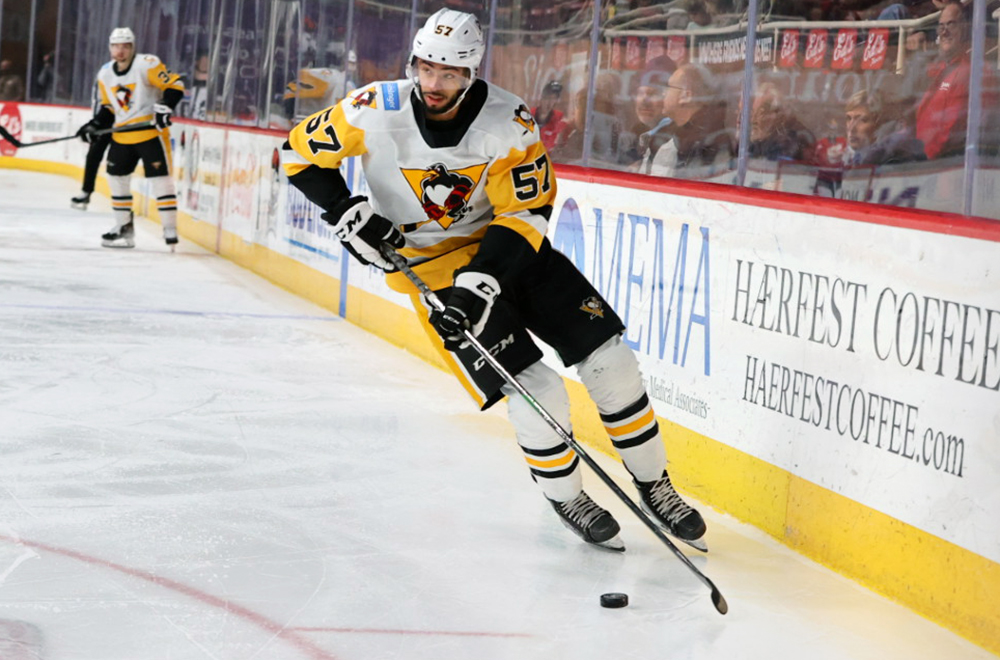 CHARLOTTE, N.C. – The Wilkes-Barre/Scranton Penguins were narrowly beaten by the Charlotte Checkers, 5-4, on Tuesday night at BoJangles’ Coliseum.

Wilkes-Barre/Scranton (19-20-2-3) erased a two-goal deficit in the third period, but the tenacious comeback proved to be in vain as Cole Schwindt notched the game-winner with 91 seconds left in regulation.

A smooth transition play led to Valtteri Puustinen opening the scoring for the Penguins at 4:36 of the first period. Three minutes later, Puustinen set-up Anthony Angello for a power-play goal that gave Wilkes-Barre/Scranton a 2-0 lead.

Former Penguin Scott Wilson put the Checkers on the board with a top-corner backhand from along the goal line at 12:32 of the opening frame.

In the second period, Charlotte potted a pair of goals separated by 56 seconds to flip its 2-1 deficit into a 3-2 lead. First, Max McCormick swept a rebound across the Penguins’ goal line, and then Cale Fleury’s point shot redirected off of a Wilkes-Barre/Scranton defender and in at 11:26 of the second stanza.

The Checkers ran their lead to 4-2 on a strike by Kole Lind three minutes into the third period.

Undeterred, the Penguins fought tooth and nail to pull themselves within striking distance. Their tireless work eventually resulted in a rebound goal from Jonathan Gruden at 7:14 of the third.

Still down by a goal, Wilkes-Barre/Scranton went to the power play late in regulation. Michael Chaput picked the top corner for a 4-4 equalizer with 2:20 left in regulation.

However, Schwindt swiftly responded for Charlotte and gave his team the victory in regulation.

Spencer Knight turned aside 30 shots for the Checkers, while Tommy Nappier recorded 22 stops for the Penguins.

Wilkes-Barre/Scranton will take on Charlotte again tomorrow, Wednesday, Feb. 15, at 7:00 p.m. The Penguins’ next home game is Saturday, Feb. 19 against the Springfield Thunderbirds. Puck drop for Penguins vs. T-Birds and Wilkes-Barre/Scranton’s annual Military Appreciation Night will be 6:05 p.m.

SECOND-PERIOD FLURRY NOT ENOUGH IN PENGUINS’ LOSS TO STARS