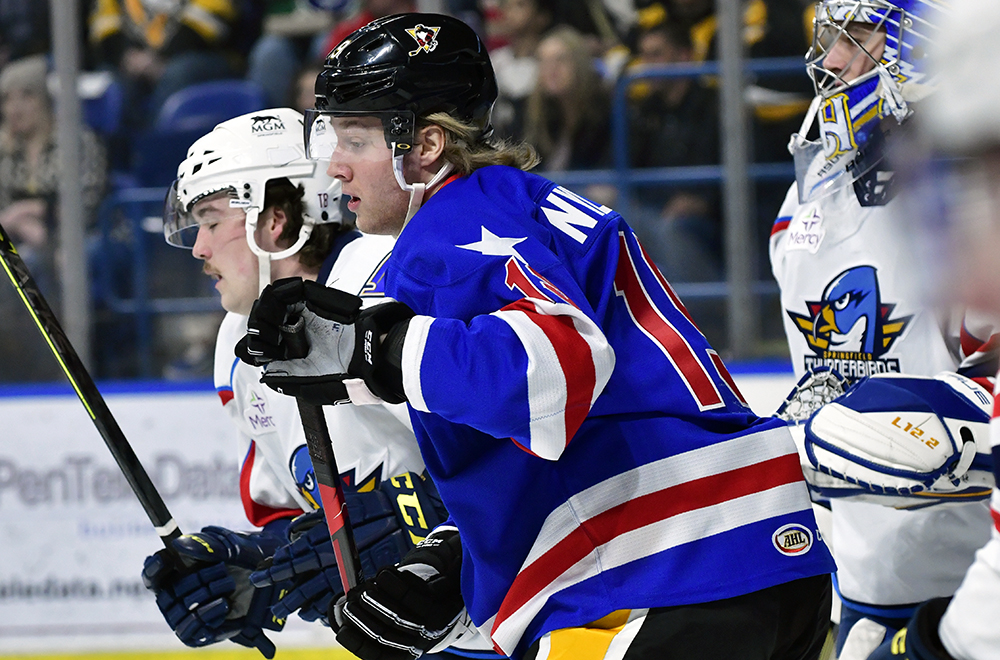 WILKES-BARRE, Pa. – Alex  Nylander tallied in regulation, and grabbed the lone goal in the shootout, to lead the Wilkes-Barre/Scranton Penguins over the Atlantic Division-leading Springfield Thunderbirds, 3-2, at Mohegan Sun Arena at Casey Plaza on Saturday night.

Wilkes-Barre/Scranton (20-21-3-2) saw its opponent storm back from a two-goal deficit in the third period to force overtime. However, Nylander delivered the only goal of the shootout and gave his team the win in front of an electrifying home crowd.

Tommy Nappier held down the fort for the Penguins in the opening frame, turning away all 14 shots he faced to keep the game at a 0-0 tie going into the first intermission.

Nylander scored shortly into the second period to put Wilkes-Barre/Scranton ahead. Mitch Reinke added to that lead with a seeing-eye shot from the point at 12:30 of the second stanza.

The Penguins held the Thunderbirds’ dynamic offense to just three shots during the second period, but the visitors came out with a purpose to start the third. James Neal put Springfield on the board with a power-play goal 23 seconds into the frame, cutting his team’s deficit in half.

The Thunderbirds pulled even, 2-2, at 9:32 when Josh Wesley snuck a shot through traffic and to the back of the Penguins’ net.

Nappier faced a four-shot barrage in overtime and rebuffed all three of Springfield’s shootout attempts to secure the victory for Wilkes-Barre/Scranton.

Both Nappier and T-Birds goalie Joel Hofer ended regulation and overtime with 30 saves of 32 shots faced, but Nappier was perfect in the shootout while Hofer was burned by Nylander for the deciding tally.

Wilkes-Barre/Scranton’s next game is Tuesday, Feb. 22 when it pays a visit to the Hershey Bears at Giant Center. Puck drop for the Penguins and Bears is 7:00 p.m. The Penguins’ next home game will be Wednesday, Feb. 23 against their other in-state rival, the Lehigh Valley Phantoms. Game time for the Penguins and Phantoms will be 7:05 p.m. at Mohegan Sun Arena at Casey Plaza.