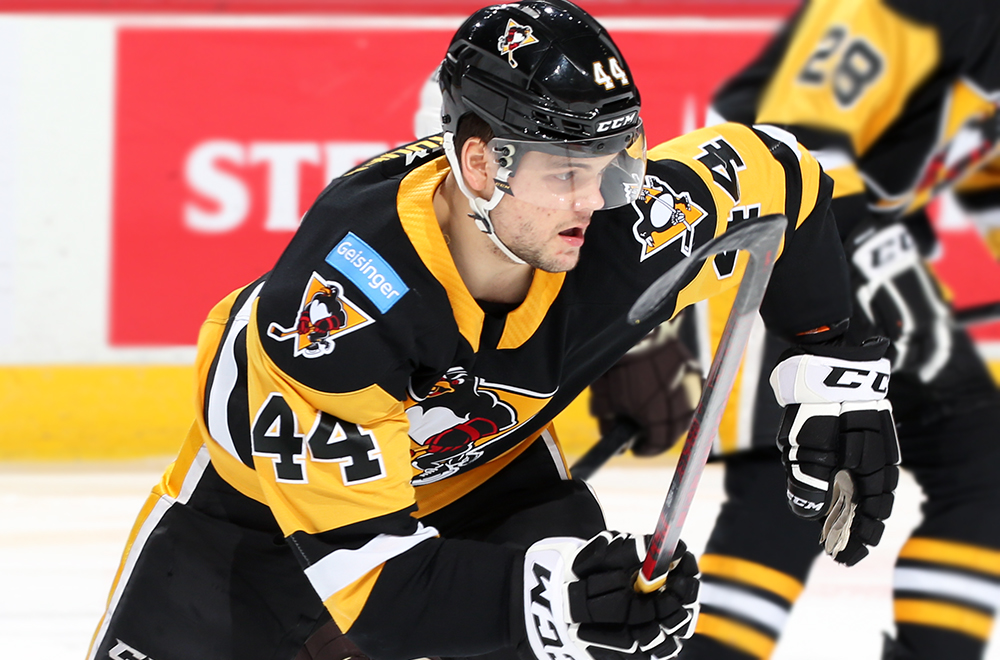 HERSHEY, Pa. – The Wilkes-Barre/Scranton Penguins skated away with a 3-1 win over the Hershey Bears at Giant Center on Tuesday night.

Wilkes-Barre/Scranton (21-21-3-2) saw its fourth line generate all of its hard-fought scoring throughout the game. Kyle Olson notched a pair of goals while Jonathan Gruden netted the first three-point game of his career (1G-2A).

After a scoreless first period, the Penguins first lit the lamp at 6:57 of the second period. A Jordy Bellerive shot glanced off of one of the Bears’ defensemen and right to Olson at the far post, who swept the puck past a sprawling Hunter Shepard.

Tommy Nappier kept the Bears off the board with a dazzling glove save on Axel Jonsson-Fjällby with under six minutes to go in the second period. Nappier’s robbery of Hershey’s leading goal-scorer was one of 26 saves on the night and maintained Wilkes-Barre/Scranton’s 1-0 lead going into the second intermission.

Both teams failed to convert on third-period power plays, and so Hershey’s last-ditch effort to tie the game came by pulling Shepard for an extra attacker with 2:26 left in regulation. That allowed Olson to pot his second of the night, an empty netter at 18:16 of the third period.

Nappier came within one minute of recording his first AHL shutout, only to be foiled by a wacky bounce. Alex Alexeyev cranked up for a point shot, but his stick snapped clean in half on the release. The puck knuckled towards the Penguins’ net-front and was redirected under the crossbar by Brian Pinho.

The bounce that victimized Nappier also brought the score back to a one-goal game. However, Gruden put the contest to bed with another empty-net goal with 23 seconds left in regulation.

Shepard was handed the loss while denying 22 of 23 shots faced.

Wilkes-Barre/Scranton’s next game is tomorrow, Wednesday, Feb. 23, against its other in-state rival, the Lehigh Valley Phantoms. Puck drop for the Penguins and Phantoms is 7:05 p.m. at Mohegan Sun Arena at Casey Plaza.

PENGUINS COME BACK FROM DOWN 3-0, BUT LOSE IN OVERTIME