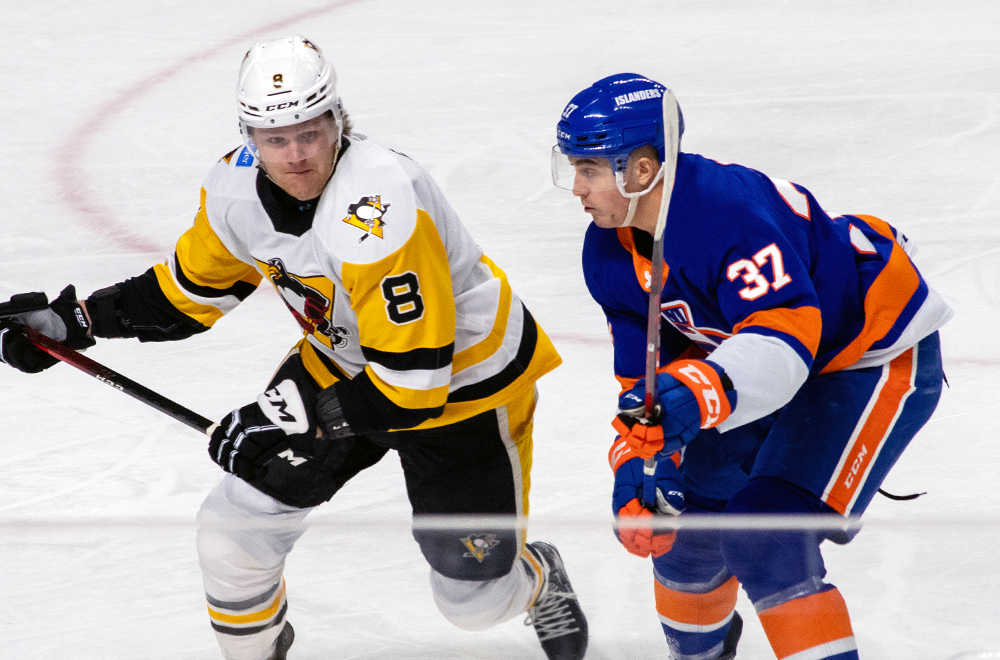 BRIDGEPORT, Conn. – The Wilkes-Barre/Scranton Penguins saw the Bridgeport Islanders survive a 42-shot barrage and sneak away with a 5-4 win at Webster Bank Arena on Friday night.

Wilkes-Barre/Scranton (23-22-2-4) received a two-goal outing from Félix Robert while Michael Chaput tacked on three assists, but Bridgeport goalie Cory Schneider fought off 31 shots in the second and third periods to provide his team with enough insurance to win.

The Islanders struck first with a slick shot by Chris Terry midway through the opening frame, but the Penguins responded less than three minutes later. Robert tucked a bullet underneath the crossbar and tied the game, 1-1.

The Penguins pulled ahead, 2-1, when Chris Ortiz notched his first AHL goal. After a clean face-off win in the offensive zone, the 21-year-old rookie confidently walked down from the blue line right to front of the Islanders net and whipped a shot through Schneider’s five-hole with 64 seconds left in the first period.

It didn’t take long for Bridgeport to tie things up, however. Simon Holmström finished off a two-on-one rush 1:13 into the second stanza.

Terry earned his second goal of the game and put his team back ahead, 3-2, at 17:46 of the middle frame.

Arnaud Durandeau lit the lamp at 4:25 of the second period for Bridgeport to capture the first two-goal lead of the game. Once again, Robert had a quick answer. By tipping in a point shot during a power play, Robert brought Wilkes-Barre/Scranton back within one less than two minutes after the Durandeau goal.

Bridgeport found another two-goal cushion when Kyle MacLean struck at 15:32 of the third.

With the goalie pulled and extra attacker on during a late man advantage, Radim Zohorna scored with 49.5 seconds left in regulation. Zohorna’s goal provided hope for a comeback, but the Penguins didn’t find an equalizer in the waning moments of the game.

Schneider finished the game with 38 saves and an assist, while Tommy Nappier had 15 stops for the Penguins.

Wilkes-Barre/Scranton’s next game is tomorrow, Saturday, Mar. 5, a rematch with the Islanders at Webster Bank Arena. The Penguins’ next home game is Wednesday, Mar. 9 when the Cleveland Monsters come to town. Wilkes-Barre/Scranton is 3-0-0-0 this season against Cleveland and has never lost on home ice to the Monsters (5-0-0-0). Puck drop for the Penguins and Monsters is slated for 7:05 p.m. at Mohegan Sun Arena at Casey Plaza.