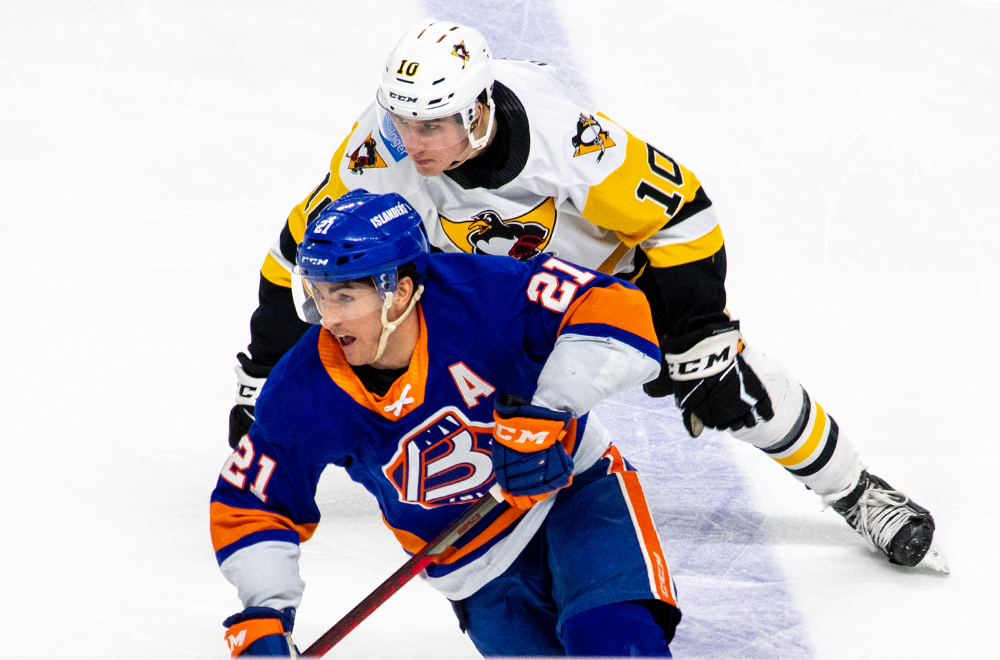 Wilkes-Barre/Scranton (23-23-2-4) tied the game early in the third period, but was undone by a pair of unanswered goals from Bridgeport.

Drew O’Connor notched the game’s first goal, a wrap-around bury at 8:46 of the first period.

Bridgeport scored a pair of goals in short order to flip its one-goal deficit into a one-goal lead. First, Andy Andreoff finished off a two-on-one rush at 12:56 of the opening frame, then Thomas Hickey put the Isles ahead a minute and a half later.

The second period featured no scoring, but plenty of fireworks. Matt Bartkowski dropped the gloves with Chris Terry with 2:43 left in the second stanza, followed up by another fight between Kyle Olson and Blade Jenkins roughly two minutes later.

The Penguins tied the game, 2-2, when Jonathan Gruden lit the lamp 1:55 into the third period. However, Arnaud Durandeau reestablished the Islanders’ one-goal edge three minutes later.

Cole Bardreau delivered an insurance marker with 5:14 left in regulation to round out the night’s scoring.

Alex D’Orio finished the game with 27 saves for the Penguins, while Jakub Škarek turned away 36 shots in the win.

Wilkes-Barre/Scranton’s next game is tomorrow, Sunday, Mar. 6, against the Providence Bruins at Dunkin’ Donuts Center. Game time for the Penguins and Bruins is 3:05 p.m.

The Penguins’ next home game is Wednesday, Mar. 9 when the Cleveland Monsters come to town. Wilkes-Barre/Scranton is 3-0-0-0 this season against Cleveland and has never lost on home ice to the Monsters (5-0-0-0). Puck drop for the Penguins and Monsters is slated for 7:05 p.m. at Mohegan Sun Arena at Casey Plaza.