PENGUINS RALLY LATE, BUT LOSE IN OVERTIME TO BRUINS 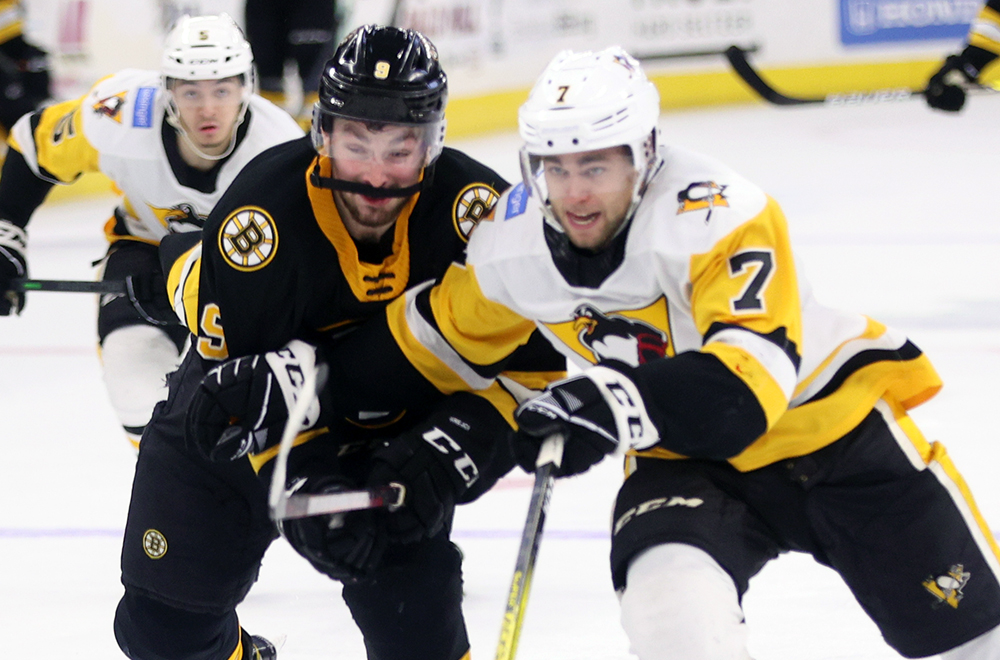 PROVIDENCE, R.I. – The Wilkes-Barre/Scranton Penguins scored a buzzer-beater to force overtime, but ultimately fell by a 5-4 score to the Providence Bruins on Sunday afternoon at Dunkin’ Donuts Center.

Wilkes-Barre/Scranton (23-23-3-4) smothered Providence in the final frame of regulation, with its efforts culminating in a tying goal from Valtteri Puustinen with 3.3 seconds left in regulation. However, Oskar Steen notched the game-winner 24 seconds into the sudden-death session.

A quiet first period ended with the Bruins ahead, 1-0. Providence snapped a 0-0 deadlock on a goal by Cameron Hughes with 2:23 left in the opening frame.

The second period featured far more scoring than the first, as the Penguins and Bruins combined for six tallies. Wilkes-Barre/Scranton earned the first two goals of the period, starting with a power-play goal by Michael Chaput at 4:12. Sam Poulin briefly put the Penguins in a 2-1 lead just two minutes later.

Jonathan Gruden pulled the Penguins back within one by stuffing a loose puck across the goal line with 3:51 left before the second intermission.

The Penguins held the Bruins to just one shot on goal during the third period, which came during a five-on-three man advantage. Wilkes-Barre/Scranton came up with a pair of clutch penalty kills late in regulation, and the team went a perfect five-for-five on the P.K. over the course of the game.

Puustinen picked the top corner in the dying seconds of the third, allowing the Penguins to squeeze out a point in the standings.

Wilkes-Barre/Scranton’s next game is back on home ice, Wednesday, Mar. 9 against the Cleveland Monsters. The Penguins are 3-0-0-0 this season against Cleveland and have never lost on home ice to the Monsters (5-0-0-0). Puck drop for the Penguins and Monsters is slated for 7:05 p.m. at Mohegan Sun Arena at Casey Plaza.