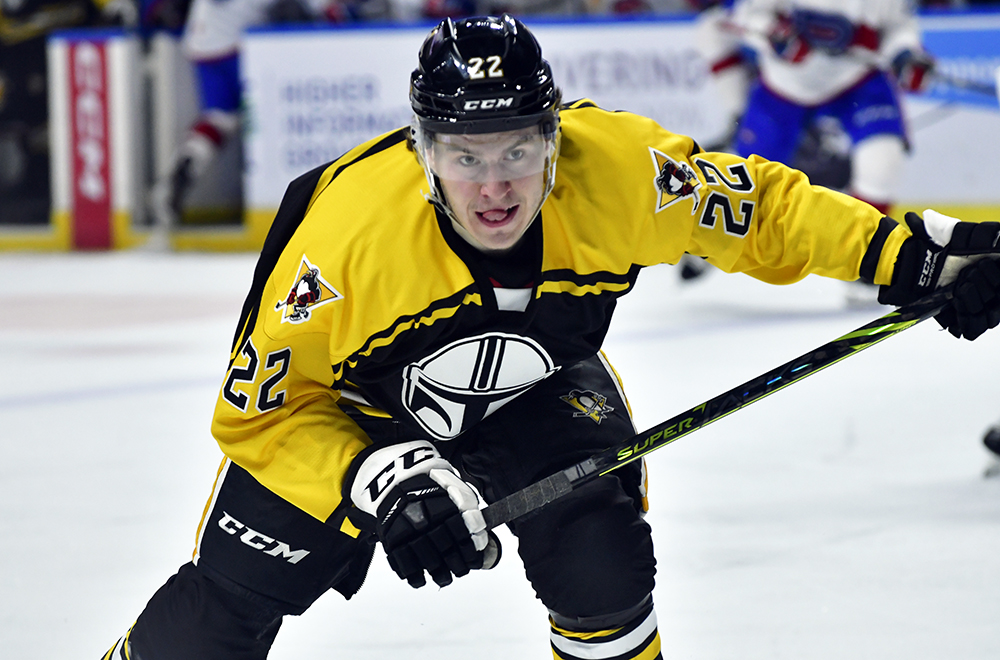 No Jedi mind tricks were necessary for rookie Sam Poulin to score the first hat trick of his career. His three goals on Saturday night helped secure the win for his club and improve Wilkes-Barre/Scranton to 24-23-4-4.

It didn’t take long for the two teams to switch the offense into hyperdrive. Poulin tallied his first of the night with a wicked shot on the rush at 1:14 of the opening frame. However, the Rocket responded with a goal by Joël Teasdale 26 seconds later.

Poulin found twine again four minutes into regulation, and Chris Bigras lifted the Penguins to a 3-1 lead at 12:12 of the first period.

After a quiet second stanza, things opened up again in the third. Alex Nylander notched a power-play goal less than two minutes into the final frame, putting Wilkes-Barre/Scranton ahead, 4-1.

Now turned to the Dark Side, former Penguin Jean-Sébastien Dea cut the Rocket’s deficit back down to two by setting up Raphaël Harvey-Pinard for a backdoor tap-in during a four-on-three man advantage. But this time it was the Penguins’ turn to strike back in swift fashion. Félix Robert converted on a breakaway 1:12 after Harvey-Pinard’s power-play goal.

Poulin rounded out the scoring and completed the hat trick with an empty-net goal with 1:57 left in regulation.

Goaltender Louis Domingue turned in a stellar performance for the Penguins, as he made 37 saves to earn the victory.

L-P Guindon started the game in net for Laval, but was pulled after allowing three goals on six shots faced. Kevin Poulin steered away 20 of the 22 shots he faced in relief.

Wilkes-Barre/Scranton’s next game is tomorrow afternoon, Sunday, Mar. 13, against the Hartford Wolf Pack. Tomorrow’s matinée is also a Kids Free Sunday. Children ages 14 and under can attend the game for free with the purchase of an adult ticket. Puck drop between the Penguins and Wolf Pack is scheduled for 3:05 p.m. at Mohegan Sun Arena at Casey Plaza.