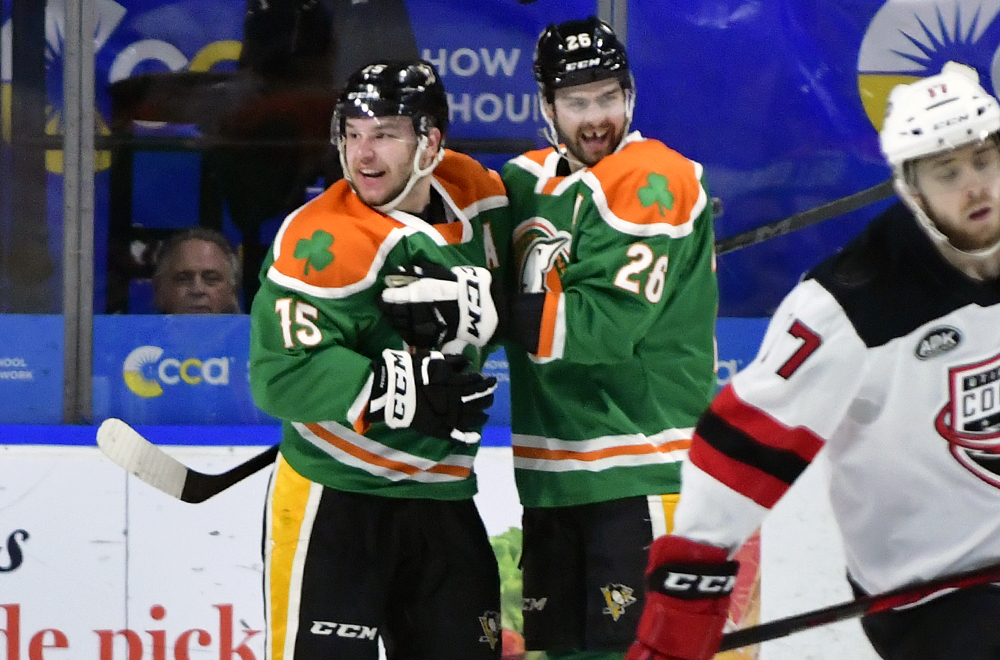 Wilkes-Barre/Scranton (26-24-4-4) rattled off three-straight goals during the course of play to build a cushion against the visiting Comets, and then goaltender Louis Domingue held down the fort with his 26 saves.

A fast-paced first period ended with Utica’s Frédérick Gauthier scoring on a breakaway with 2:03 left before the intermission.

The Penguins flipped that one-goal deficit to a one-goal lead with a pair of swift strikes early in the middle frame. First, Cam Lee used some elusive skating at the blue line to find space for a wrist shot that was tipped in by Sam Poulin at 2:28. Roughly three minutes later, Drew O’Connor set up Jordy Bellerive for a snipe from the left hashmark, putting Wilkes-Barre/Scranton ahead, 2-1.

Filip Hållander increased that lead to 3-1 with another tip in at 4:13 of the third period.

The Penguins were faced with three penalty kills during the third period, where Domingue truly shined. He made a smooth, post-to-post kick save on a scorching one-timer unleashed by Fabian Zetterlund during the first of those three man advantages.

After that, the Penguins did a lights-out job of blocking shots to lighten their goalie’s workload throughout the final frame. However, Utica cashed in on a six-on-four, extra-attacker power play with 4.7 seconds left in regulation to put another blemish on Domingue’s stellar showing.

Akira Schmid was dealt the loss for Utica, stopping 16 of the 19 shots he faced.

Now Wilkes-Barre/Scranton hits the road for four-straight away games, all played north of the border. The first of which is Tuesday, Mar. 22 against the Toronto Marlies. Puck drop between the Penguins and Marlies is 7:00 p.m. at Coca-Cola Coliseum.

The Penguins’ next home game is Wednesday, Mar. 30 against the Hartford Wolf Pack. Game time for Wilkes-Barre/Scranton’s return home is scheduled for 7:05 p.m. at Mohegan Sun Arena at Casey Plaza.

THE HOLIDAY HAT TRICK IS BACK