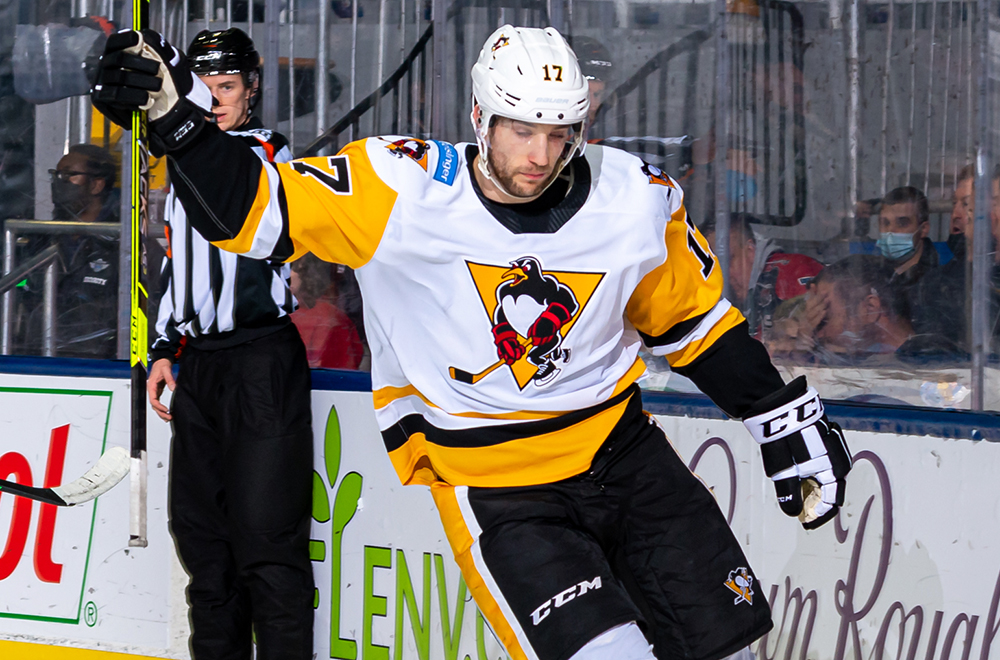 Wilkes-Barre/Scranton (27-24-4-4) started its offensive outburst during an action-packed second period. Five different players cashed in for the Penguins as the team kicked off its four-game, Canadian road trip on a high note.

Toronto’s Joey Anderson delivered the game’s first goal with a tip-in on the power play at 14:07 of the opening frame.

The Penguins quickly turned the tables in the second stanza, tying things up two minutes into the period. Will Reilly unloaded a shot from the point that was redirected past Michael Hutchinson by Kasper Björkqvist.

Anthony Angello and Jamie Devane combined for a pair of goals separated by 25 seconds to put Wilkes-Barre/Scranton ahead, 3-1. Angello cranked a perfectly placed shot over the glove hand of Hutchinson and into the short-side, top corner at 7:07 of the middle frame. On the next shift, Devane stuffed a rebound across the goal line.

Unsatisfied with just a two-goal lead, the Penguins cashed in one more time before the second intermission. Kyle Olson knocked one in with 19 seconds left in the period to light the lamp on his 23rd birthday.

Michael Chaput put the icing on the cake by taking advantage of a blatant turnover between the hashmarks in the Marlies’ zone and beating Hutchinson with quick hands in tight. Chaput’s pretty finish came with 2:39 left in regulation.

Louis Domingue posted 30 saves while making his fifth-consecutive start for the Penguins, while Hutchinson turned away 29 shots for the Marlies.

Wilkes-Barre/Scranton will take on Toronto again tomorrow, Wednesday, Mar. 23. The Penguins’ rematch with the Marlies begins at 7:00 p.m. at Coca-Cola Coliseum. The Penguins’ next home game is Wednesday, Mar. 30 against the Hartford Wolf Pack. Game time for Wilkes-Barre/Scranton’s return home is scheduled for 7:05 p.m. at Mohegan Sun Arena at Casey Plaza.