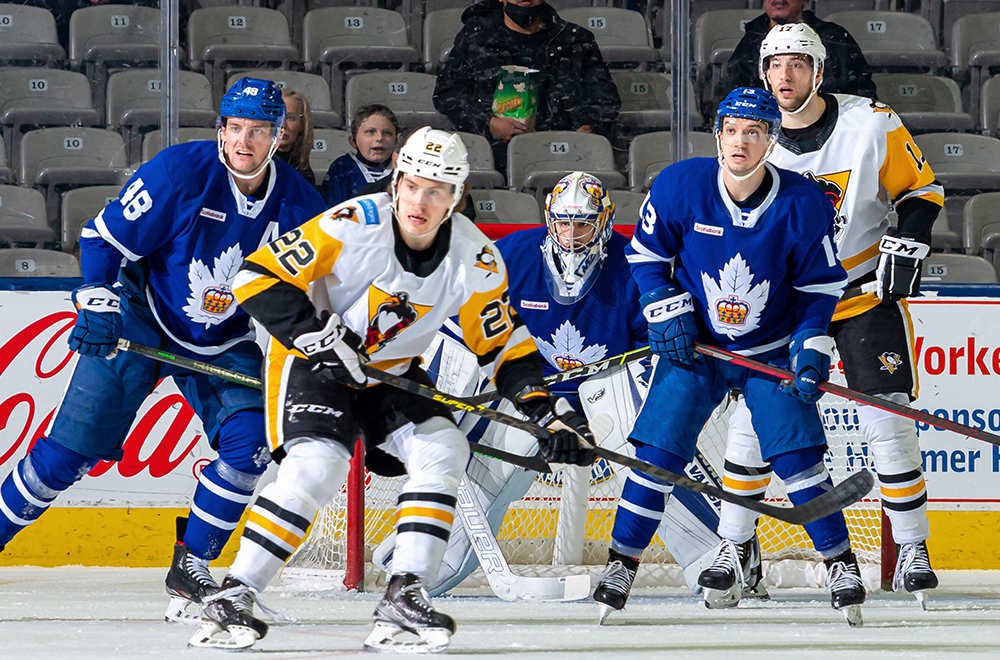 TORONTO, Ont. – The Wilkes-Barre/Scranton Penguins were beaten by the Toronto Marlies, 6-1, on Wednesday night at Coca-Cola Coliseum.

Wilkes-Barre/Scranton (27-25-4-4) saw its opponent run up the score with a four-point effort from Nick Robertson (1G-3A) and a three-point outing from Josh Ho-Sang (2G-1A).

The Marlies opened the scoring on a great individual effort from Ho-Sang with 1:31 left in the first period.

Robertson helped deliver Toronto’s next two goals in the middle frame, using his shifty skating to set up Jack Kopacka on the doorstep at 6:30 and then tucking a power-play goal for himself at 14:11.

A minute and a half after Robertson’s man-advantage marker, Bobby McMann pushed Toronto’s lead to 4-0.

The Penguins refused to go into the second intermission empty-handed, so they ultimately cashed in on a late-period power play. Awarded their first man advantage of the game with 5.4 seconds left in the frame, Wilkes-Barre/Scranton won the face-off, and Juuso Riikola pounded a slap slot towards the net. The bid was tipped in by Drew O’Connor with 0.3 seconds left in the period.

Toronto reestablished its four-goal edge early in the third with Robertson picking up his fourth point of the game by assisting on Ho-Sang’s second tally of the night.

McMann notched another power-play goal for the Marlies to round out the scoring at 12:49 of the final frame.

Louis Domingue made 28 saves for the Penguins, while Marlies goalie Keith Petruzzelli delivered a 31-save performance.

Wilkes-Barre/Scranton continues its Canadian road trip with its next game on Friday, Mar. 25 against the Belleville Senators. Puck drop between the Pens and Sens is scheduled for 7:00 p.m. at CAA Arena. The Penguins’ next home game is Wednesday, Mar. 30 against the Hartford Wolf Pack. Game time for Wilkes-Barre/Scranton’s return home is scheduled for 7:05 p.m. at Mohegan Sun Arena at Casey Plaza.