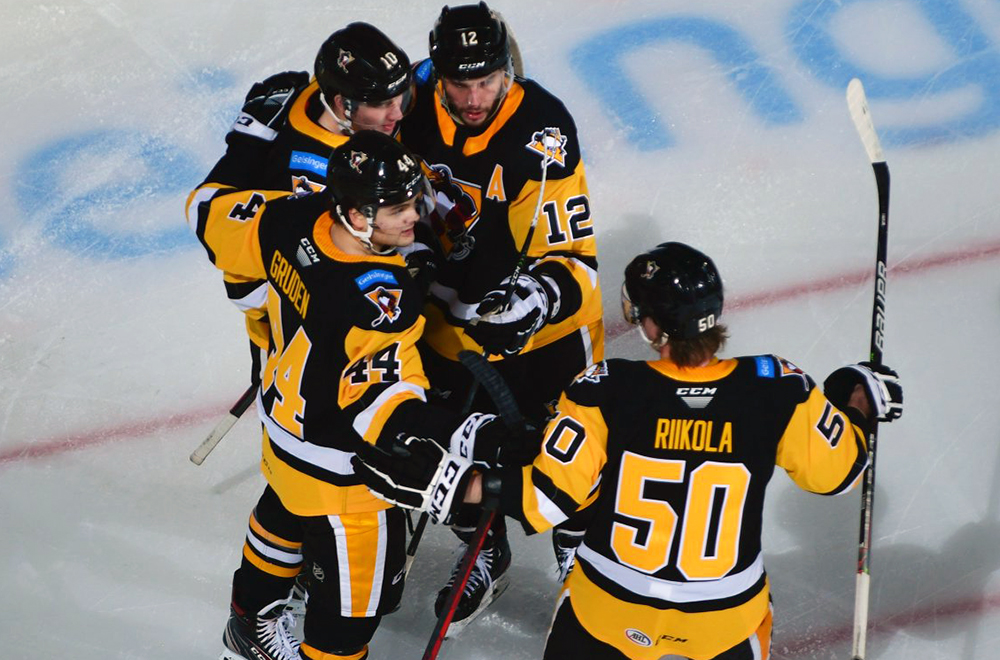 WILKES-BARRE, Pa. – The Wilkes-Barre/Scranton Penguins received a pair of goals from Jonathan Gruden, including the shorthanded game-winner, and defeated the Lehigh Valley Phantoms, 3-1, on Wednesday night at Mohegan Sun Arena at Casey Plaza.

The win raised the Penguins record to 31-27-4-4, and moved them into fifth place in the Atlantic Division standings.

After wreaking havoc for most of the first period, the Penguins finally solved Phantoms goalie Felix Sandström with 1:48 left in the opening frame. Sam Poulin detected a rebound atop Lehigh Valley’s crease and kicked it from his skate to his stick before tucking it in.

The Penguins were dealt three penalty kills during the second stanza, but instead of the Phantoms using those man-advantage opportunities to tie the game, Wilkes-Barre/Scranton utilized them to extend its lead. Gruden polished off a shorthanded goal during the third of those penalty kills at 9:02 of the middle frame.

With a chance to put Wilkes-Barre/Scranton ahead by three in the third period, Juuso Riikola was denied by the crossbar. That strike of the iron loomed large as Lehigh Valley started to slowly tilt the ice in its favor.

Hayden Hodgson put the Phantoms on the board and sliced their deficit to 2-1 at 14:30 of the third.

Lehigh Valley pulled its goalie for an extra attacker with two minutes left in regulation, but that only resulted in Gruden sealing the victory for the Penguins with his second goal of the night.

Wilkes-Barre/Scranton’s next game is Saturday, Apr. 9, when the Penguins pay a visit to Upstate Medical University Arena to take on the Syracuse Crunch. Puck drop between the Penguins and Crunch is scheduled for 7:00 p.m.

The Penguins’ next home game is a week from tonight, Wednesday, Apr. 13, against the Charlotte Checkers. Game time for Penguins vs. Checkers is slated for 7:05 p.m. at Mohegan Sun Arena at Casey Plaza.

Individual game tickets for the Penguins’ four remaining home games as well as season-ticket packages for the upcoming 2022-23 season are on sale now. Full-Season, 22-game, 12-game, Flexbook and Premium Seating plans are available by reaching out to the Penguins directly at (570) 208-7367.