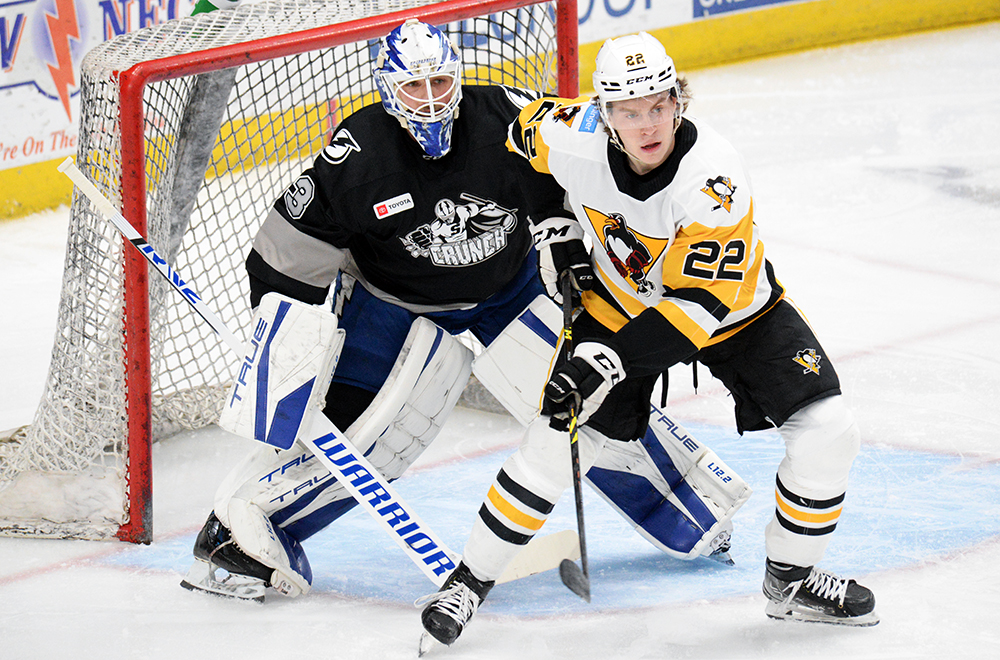 SYRACUSE, N.Y. – As hard as the Wilkes-Barre/Scranton Penguins tried, they could not solve Max Lagacé during a 1-0 loss to the Syracuse Crunch on Saturday night at Upstate Medical University Arena.

Wilkes-Barre/Scranton (31-28-4-4) put 48 shots on goal during the game, but Lagacé turned them all away. Lagacé’s performance set the record for most saves by an opposing goalie in a shutout loss by the Penguins

After a fast-paced and physical start to the game gave way to a 0-0 score at the first intermission, Gemel Smith finally broke through at 2:56 of the second period. Smith took a backdoor pass from Nick Perbix and slammed the feed past Louis Domingue for the night’s only goal.

The Penguins proceeded to put 21 shots on goal during the middle frame, a single-period season-high, but Lagacé had the answer every time.

Wilkes-Barre/Scranton generated an additional 14 shots during the third period, many of which were point-blank chances or redirections at the net-front. Lagacé held firm all the way down to the final minutes of regulation.

Domingue finished the night with 30 saves for Wilkes-Barre/Scranton. The Penguins’ penalty kill also finished perfect for the seventh game in a row.

Wilkes-Barre/Scranton’s next game is back on home ice on Wednesday, Apr. 13 against the Charlotte Checkers. Game time for the Penguins and Checkers is slated for 7:05 p.m. at Mohegan Sun Arena at Casey Plaza.

Individual game tickets for the Penguins’ four remaining home games as well as season-ticket packages for the upcoming 2022-23 season are on sale now. Full-Season, 22-game, 12-game, Flexbook and Premium Seating plans are available by reaching out to the Penguins directly at (570) 208-7367.