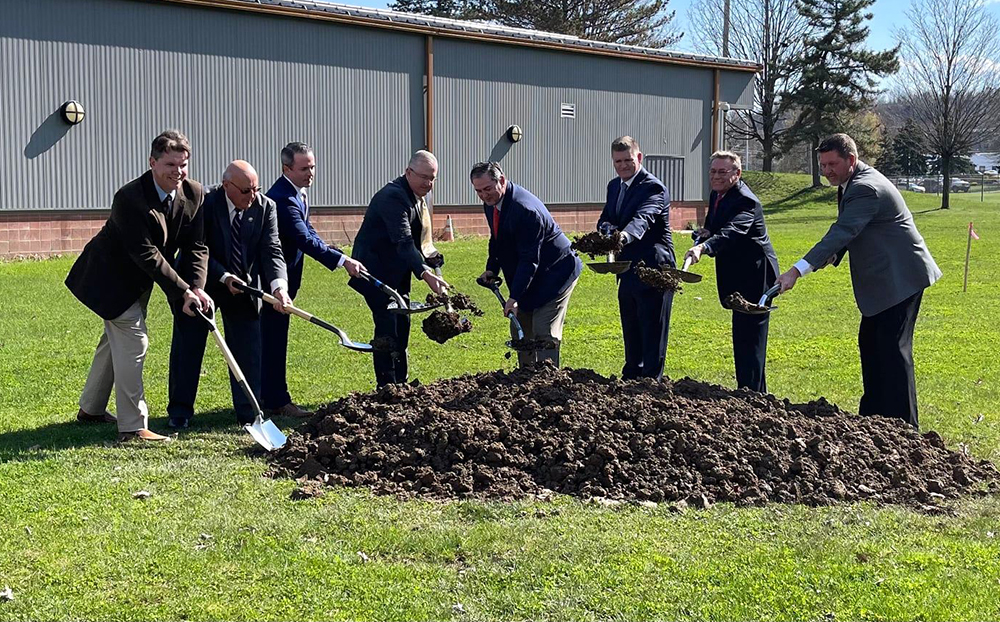 Slightly more than two years ago, public officials, private donors and Wilkes-Barre/Scranton Penguins representatives gathered at the Toyota SportsPlex to announce that a new dek hockey rink was to be built next to the facility in the summer of 2020.

Then, COVID hit, and plans came to a screeching halt.

Many of those same dignitaries reconvened at the building to finally break ground on the dek, which is part of the Pittsburgh Penguins Foundation’s Project Power Play.

The rink – the first of its kind in the area – will be located adjacent to the Toyota SportsPlex, outfitted with sport court, as well as a scoreboard and covered bench areas.

The facility will afford youngsters interested in playing hockey an affordable introduction to the sport.

“It’s an ice hockey rink on sneakers, so anyone can play,” explained Barrett, to those who may be unfamiliar with the sport. “It’s a cost-effective way to get children and adults off the couch and into an organized athletic activity.”

Funding for the project was made possible thanks to a $250,000 Pennsylvania Department of Community & Economic Development (DCED) Tourism Grant secured by State Senator John T. Yudichak, as well as significant pledges from the Pittsburgh Penguins Foundation and Highmark Corporate Giving.

“This is our 16th dek that we’re building here. We have a large footprint in western Pennsylvania, and we’re excited to come to this region,” said Jim Britt, Executive Director of the Pittsburgh Penguins Foundation who started his career working with the Wilkes-Barre/Scranton Penguins.

“We use two phrases a lot [at the Foundation]. We talk about ‘harnessing the power of hockey’ and ‘growing with the game’. And what that means is that we are focused on helping kids use the game of hockey as a vehicle to live healthier, more active lives; improve their education; and grow up to be happy, healthy adults.”

Brian Rinker, Market President for the Eastern Pennsylvania region of Highmark Inc., noted his organization’s long ties to the Penguins, and extolled the virtues of the new facility.

“This is about fitness, and focusing on kids,” stated Rinker. “Hopefully we can get families and kids together and get them physically active so they can have healthy and productive lives. That’s a big part of what Highmark stands for.”

No firm timeline was announced for completion of construction, but a late summer opening is a possibility. Programming will include learn to play classes, clinics, leagues and pick up games.

To request information on the dek hockey rink and its programs, fill in the form below.