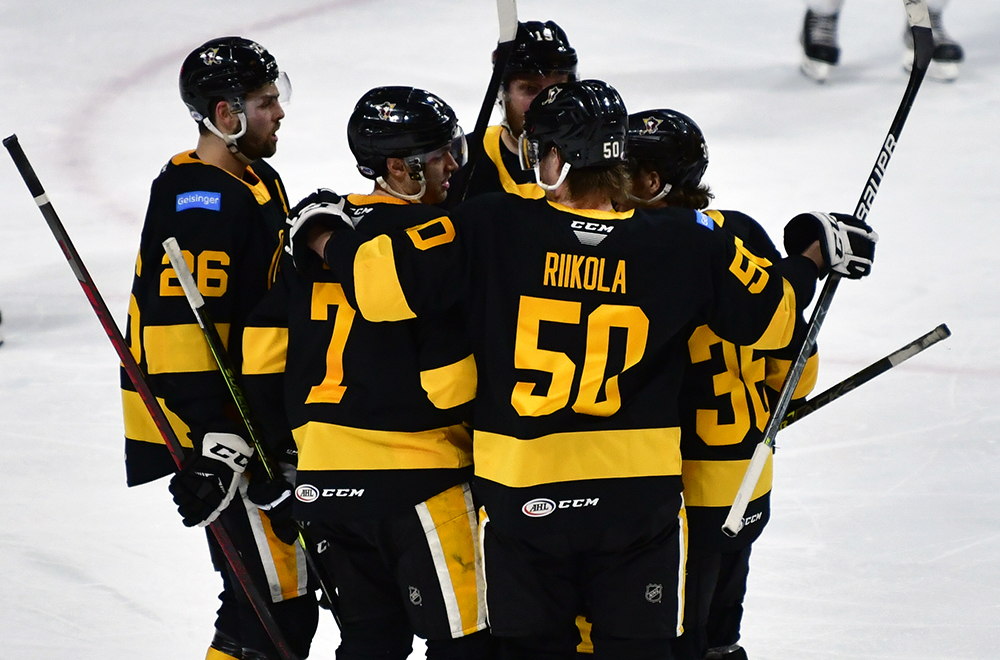 WILKES-BARRE, Pa. – The Wilkes-Barre/Scranton Penguins emerged on the winning end of a high-scoring affair with the Bridgeport Islanders, 6-5, on Saturday night at Mohegan Sun Arena at Casey Plaza, behind Juuso Riikola’s four-assist performance. In front of a raucous crowd cheering Juuso Riikola and the team on Fan Appreciation Night, Wilkes-Barre/Scranton (33-29-4-4) received goals from six-different players throughout the game. Defenseman Juuso Riikola led the Penguins’ offense with a career-best four assists.

Bridgeport took off early, scoring on its first two shots of the game. First, Simon Holmström buried on a breakaway at 3:37, followed by a strike by Michael Dal Colle one minute later.

Félix Robert assured the home crowd that everything would be okay when he picked the top corner to put the Penguins on the board midway through the opening frame.

Filip Hållander tied things up, 2-2, with his persistence at the Islanders’ net-front. After a shot by Valtteri Puustinen trickled through Cory Schneider and hit the post, Hållander fought his way through traffic to find the loose puck and stuff it off of Schneider and in with 1:38 left in the first period.

Puustinen and Mitch Reinke proceeded to run the Penguins’ lead to 4-2 with goals two and a half minutes apart.

Bridgeport pulled back within one with a power-play goal by Chris Terry at the halfway mark of the game, but Michael Chaput responded with a man-advantage marker for Wilkes-Barre/Scranton.

Drew O’Connor extended that lead to 6-3 on a quick face-off play late in the second period.

Holmström scored his second of the night with 10 seconds left before the second intermission, another power-play goal for Bridgeport. Holmström picked up an assist on Paul LaDue’s goal at 13:49 of the third period, but the Islanders came no closer to tying the game.

Tommy Nappier made 17 saves for his team-leading 11th win of the season, while Schneider turned away 28 shots in the loss.

Wilkes-Barre/Scranton’s next game is its last home game of the 2021-22 regular season, Tuesday, Apr. 19 against the Hershey Bears. Puck drop between the Penguins and Bears is scheduled for 7:05 p.m. at Mohegan Sun Arena at Casey Plaza.