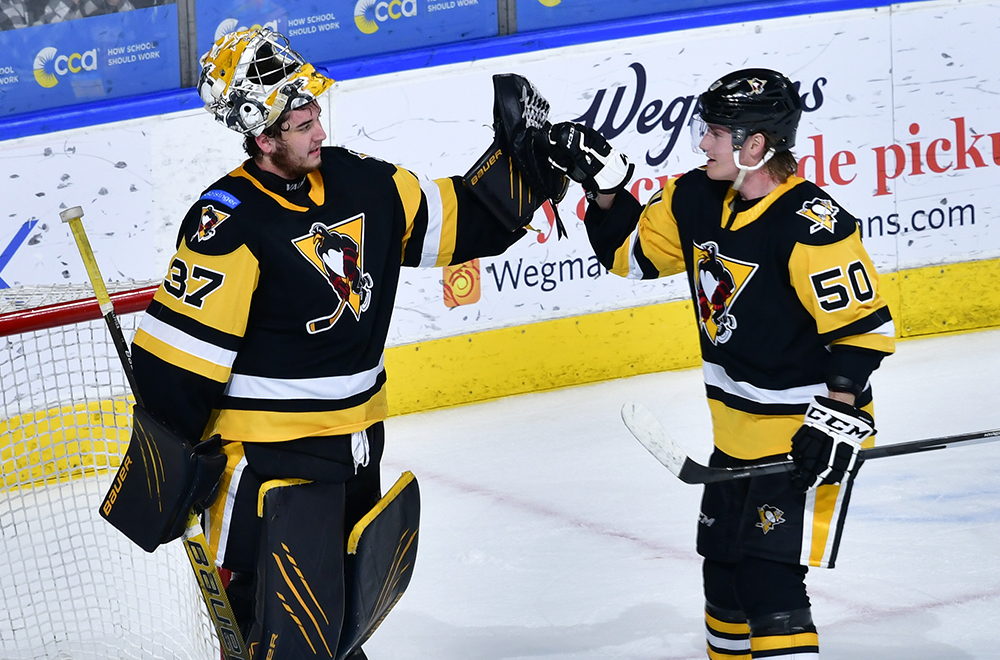 Wilkes-Barre/Scranton (34-29-4-4) ends its home schedule with Nappier making 24 saves against the team’s oldest rival. Nappier held down the fort through a game that was neck-and-neck until the Penguins pulled away in the third period.

The first period ended in a scoreless tie, but not for a lack of opportunities. Penguins forwards Valtteri Puustinen and Alex Nylander both had breakaways that were turned away by Bears goalie Zach Fucale. Mike Sgarbossa also had a breakaway chance for Hershey, but he hit the post.

It seemed as if the game was destined to enter the second intermission still knotted at 0-0, but Wilkes-Barre/Scranton used a late shorthanded goal to finally fool Zach Fucale. Kasper Björkqvist sent a pass from the corner to the top of the crease, where Michael Chaput got a glancing piece of it to steer it between Fucale’s legs and across the goal line. Chaput’s shorty arrived with 1:20 left in the second period.

Nylander tacked on an insurance marker at 4:19 of the third period, slamming in a pinpoint feed from Cam Lee. Pierre-Olivier Joseph sealed the win with an empty-net goal late in regulation.

Fucale recorded 20 saves on 22 shots faced in the loss for Hershey.

Wilkes-Barre/Scranton’s next game is the start of its season-ending, five-game road trip. The Penguins will trek to Dunkin’ Donuts Center to take on the Providence Bruins on Friday, Apr. 22. Puck drop between the Penguins and Bruins is slated for 7:05 p.m.

The Penguins can clinch a berth in the Calder Cup Playoffs as early as Friday, but individual tickets for a potential playoff home game will go on sale tomorrow, Wednesday, Apr. 20, at 10:00 a.m. Fans who wish to reserve their seat for Wilkes-Barre/Scranton’s first playoff home game can call the Penguins’ front office at (570) 208-7367.