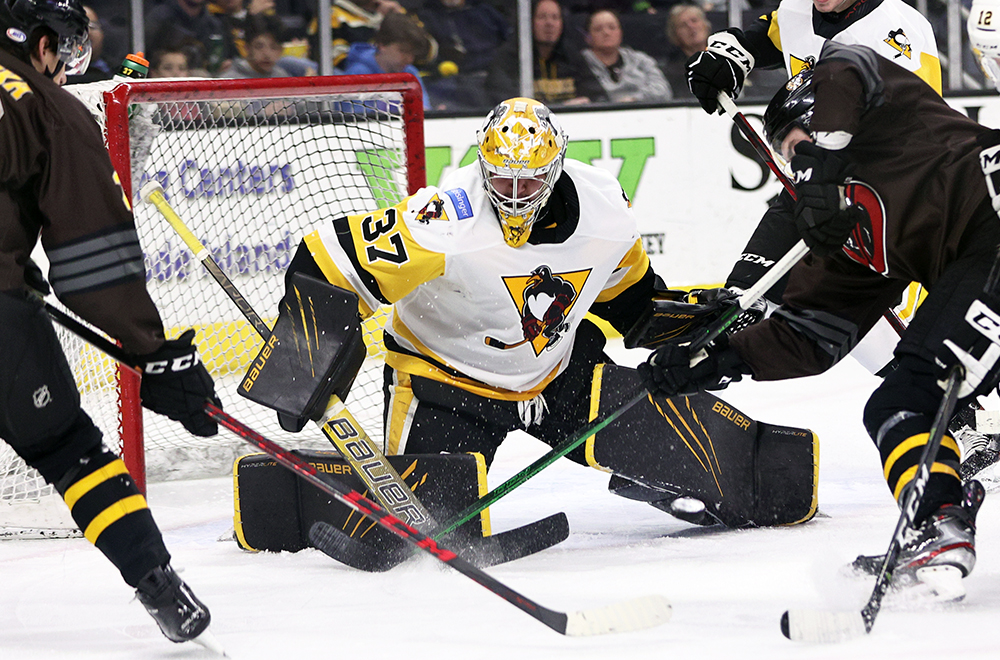 PROVIDENCE, R.I. – The Wilkes-Barre/Scranton Penguins held up their end of the bargain by defeating the Providence Bruins, 4-1, on Friday night at Dunkin’ Donuts Center.

With Wilkes-Barre/Scranton (35-29-4-4) securing victory and losses suffered by the Hartford Wolf Pack and Lehigh Valley Phantoms, the Penguins clinched a berth in the 2022 Calder Cup Playoffs.

The Penguins struck first for a power-play goal at 13:43 of the first period, when Radim Zohorna buried a rebound at the side of the Bruins’ net. However, Providence responded with a man-advantage marker of its own. Justin Brazeau tucked in a backdoor feed a minute and a half after Zohorna opened the scoring.

Matt Bartkowski put Wilkes-Barre/Scranton ahead, 2-1, with a slap shot from the point at 8:17 of the second stanza.

Zohorna notched his second power-play goal of the night – another rebound deposit – with 4:02 left in the middle frame.

Up by two goals and tasked with a pair of penalty kills in the third period, Wilkes-Barre/Scranton limited Providence to just six shots on goal in the last 20 minutes of regulation. The Penguins put a bow on things with a goal by Kyle Olson at 14:56 of the third period.

Hartford fell to the Charlotte Checkers, 2-1, and Lehigh Valley dropped an overtime decision to the Hershey Bears, 4-3, for the Penguins to lock down a postseason berth.

Wilkes-Barre/Scranton’s next game is tomorrow, Saturday, Apr. 23, against the Springfield Thunderbirds. Puck drop between the Penguins and T-Birds is slated for 6:05 p.m. at MassMutual Center.

The Penguins’ first-round playoff opponent is still unknown, but individual tickets for their first playoff home game are on sale now. Fans who wish to reserve their seats for Wilkes-Barre/Scranton’s playoff run can call the Penguins’ front office at (570) 208-7367.