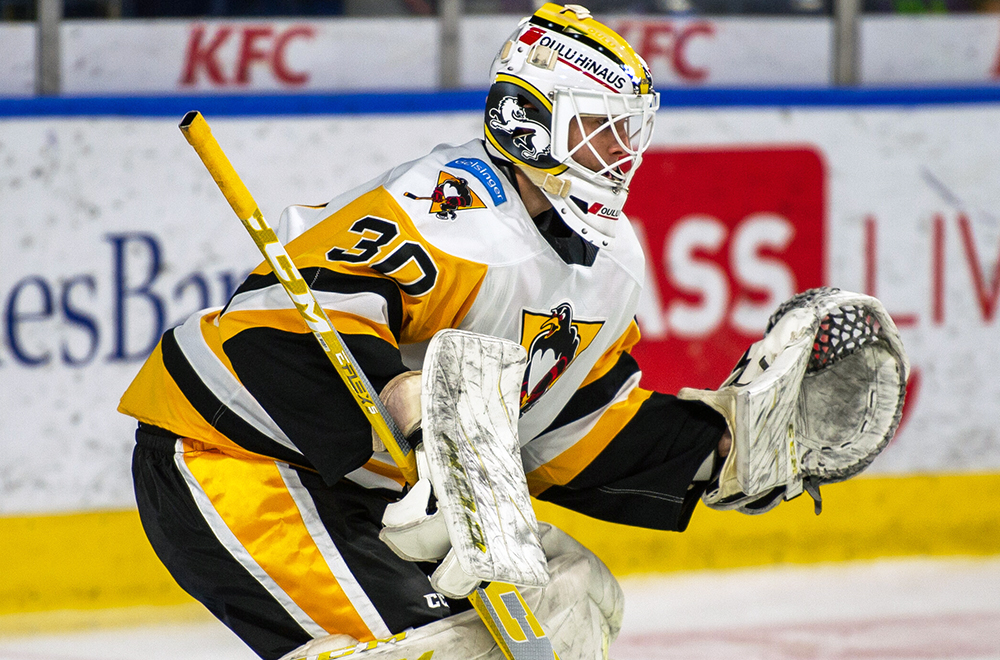 SPRINGFIELD, Mass. – The Wilkes-Barre/Scranton Penguins lost to the Springfield Thunderbirds, 3-1, on Saturday night at MassMutual Center.

Wilkes-Barre/Scranton (35-30-4-4) tallied first, but then allowed a quick equalizer and surrendered a late first-period goal that proved to be the difference. Twenty-year-old goalie Joel Blomqvist made 25 saves on 27 shots faced while making his AHL debut.

For the second game in a row, Radim Zohorna opened the scoring with a power-play goal. The Penguins’ forward tipped in a shot from Mitch Reinke at 7:05 of the first period.

However, Tommy Cross responded for Springfield 32 seconds after Zohorna kicked things off.

With time ticking down in the first period, the Thunderbirds strung together a smooth passing play for their own power-play goal. James Neal polished things off with four seconds left in the frame.

The Penguins then out-bid their opponent 13-7 in the third period. Once again, they couldn’t muster a tying goal. Will Bitten sealed the victory for Springfield with an empty netter with 55.8 seconds left in regulation.

Hofer downed the Penguins by turning away 32 shots throughout his 60 minutes of work.

Wilkes-Barre/Scranton’s next game is tomorrow afternoon, Sunday, Apr. 24, against the Hartford Wolf Pack. Puck drop between the Penguins and Wolf Pack is slated for 3:00 p.m.

The Penguins’ first-round playoff opponent is still unknown, but individual tickets for their first playoff home game are on sale now. Fans who wish to reserve their seats for Wilkes-Barre/Scranton’s playoff run can call the Penguins’ front office at (570) 208-7367.