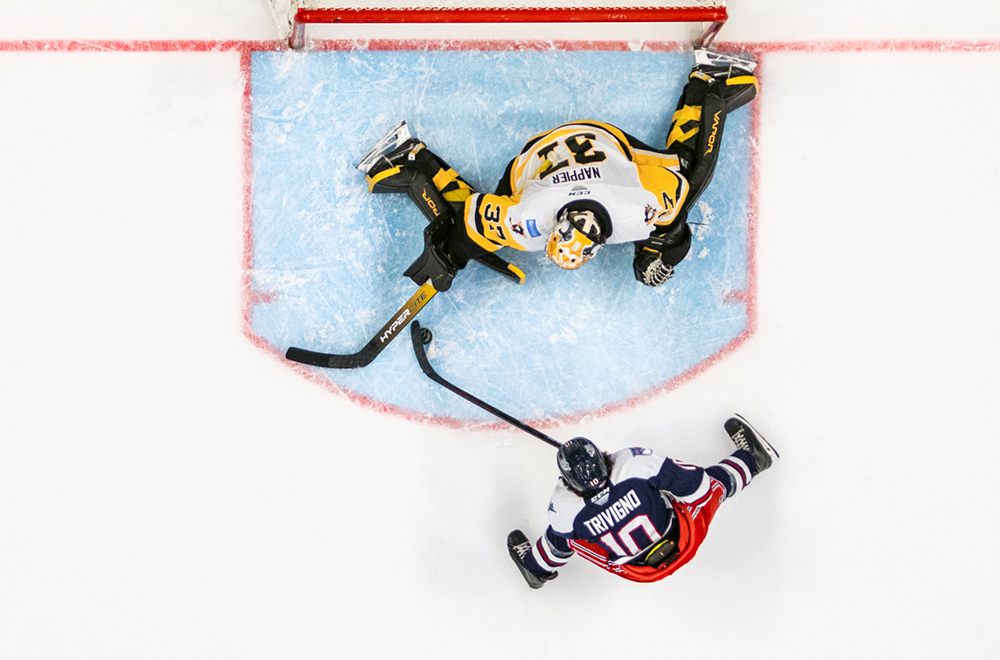 HARTFORD, Conn. – The Wilkes-Barre/Scranton Penguins closed out their three-in-three road trip with a 6-3 loss to the Hartford Wolf Pack on Sunday afternoon at XL Center.

Hartford wasted little time in jumping ahead, 1-0. Alex Whelan stuffed in a loose puck behind Tommy Nappier just 1:58 into the game.

Hållander pulled the Penguins even by beating Adam Húska down low at 11:34.

Nylander, who set up Hållander’s first goal, found the back of the net at 3:34 of the second period, giving Wilkes-Barre/Scranton its first lead of the day.

Hartford tied things up, 2-2, on Whelan’s second goal of the game at 12:25 of the middle frame, but Hållander responded with his second tally less than three minutes later.

The Penguins successfully dispatched each of their first three penalty kills in the game, but were finally beaten when they were handed a pair of minors on the same play. Late in the second period, the fallout from a post-whistle scrum resulted in a two-minute, two-man advantage for the Wolf Pack. Lauri Pajuniemi capitalized with 25 seconds left before the second intermission.

Pajuniemi then took advantage of a Penguins turnover to feed Bobby Trivingo for his first pro goal five minutes into the third period. Pajuniemi tipped in a point shot from Hunter Skinner midway through the final frame to grant the Wolf Pack at two-goal cushion.

Jared Tinordi rounded out the scoring with an empty-net goal with 3:07 left in regulation.

Nappier turned aside 25 of his 30 shots faced, while Húska denied 28 shots for Hartford.

Wilkes-Barre/Scranton’s next game is Friday, Apr. 29, against the Syracuse Crunch. Puck drop between the Penguins and Crunch is slated for 7:00 p.m. at Upstate Medical University Arena.

The Penguins will face-off against the Hershey Bears in the first round of the 2022 Calder Cup Playoffs. Individual tickets for their first playoff home game on Friday, May 6 are on sale now. Fans who wish to reserve their seats for Wilkes-Barre/Scranton’s playoff run can call the Penguins’ front office at (570) 208-7367.