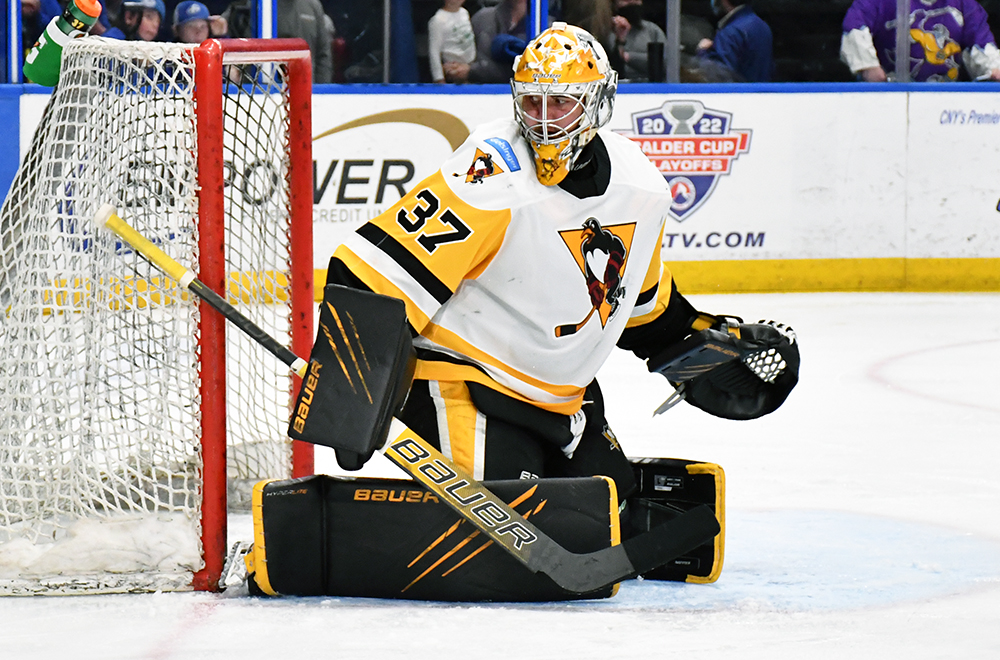 SYRACUSE, N.Y. – The Wilkes-Barre/Scranton Penguins fell in their penultimate game of the regular season, 4-1, to the Syracuse Crunch on Friday night at Upstate Medical University Arena.

Wilkes-Barre/Scranton (35-32-4-4) received its only goal from Radim Zohorna, tallying on his 26th birthday. The strike also gave Zohorna four goals in his last four games.

Syracuse opened the scoring at 12:48 of the first period. Remi Elie darted into the Penguins’ zone and made a slick, backhand-to-forehand more before whipping the puck inside the far post.

The Penguins pulled even on a lovely play by Zohorna. The towering, 6-foot-6 forward danced laterally across the slot before shooting back across the grain to pick the top corner at 4:42 of the second period.

The Crunch hopped back on top, 2-1, with Simon Ryfors converting on a two-on-one rush eight minutes into the middle frame. Gabriel Dumont provided Syracuse with a two-goal cushion with a power-play goal before the second intermission.

Wilkes-Barre/Scranton pushed in the third, but failed to solve Lagacé for a second time. Alex Green ultimately sealed the win for Syracuse with an empty-net goal with 18.8 seconds remaining.

Penguins goalie Tommy Nappier made a career-high 33 saves in the loss, while Lagacé turned away 20 shots for the Crunch.

Wilkes-Barre/Scranton’s next game is its final game of the 2021-22 regular season, tomorrow, Saturday, Apr. 30. The Penguins will travel to PPL Center to face-off against the Lehigh Valley Phantoms at 7:05 p.m.

The Penguins’ first-round playoff series against the Hershey Bears starts on Friday, May 6 at Mohegan Sun Arena at Casey Plaza. Individual tickets for Wilkes-Barre/Scranton’s home playoff games as well as full postseason packages are on sale now. Fans who wish to reserve their seats for Wilkes-Barre/Scranton’s run in the 2022 Calder Cup Playoffs can call the Penguins’ front office at (570) 208-7367.