BEARS SQUEAK OUT 2-1 WIN OVER PENGUINS IN GAME 2 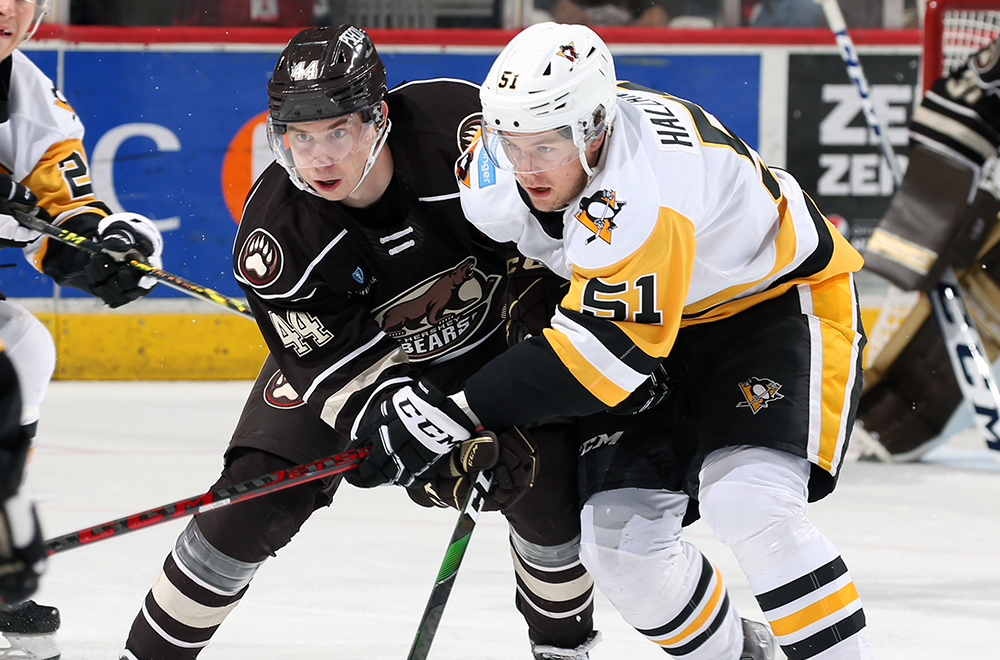 HERSHEY, Pa. – The Wilkes-Barre/Scranton Penguins battled tooth and nail to the bitter end, but lost Game 2 in their Atlantic Division First Round playoff series to the Hershey Bears, 2-1, at Giant Center on Sunday night.

The Bears’ victory forces a third and final game in the best-of-three series, which will take place back on the Penguins’ home ice tomorrow night.

Hershey used its power play to open the scoring at 4:07 of the first period. Beck Malenstyn tipped in a point shot to not only give his team a 1-0 lead, but also snap Tommy Nappier’s shutout streak against the Bears at 137:03.

Dylan McIlrath briefly gave the Bears a 2-0 edge midway through the second period, but the Penguins responded 30 seconds later. Alex Nylander lofted a perfect pass to a crease-crashing Félix Robert, who redirected the puck past Pheonix Copley at 10:46 of the middle frame.

The Penguins generated a couple of close calls around the Bears’ net-front in the third period, but none slipped past Copley. With two minutes to go in regulation, Wilkes-Barre/Scranton pulled Nappier for an extra attacker. An equalizer never arrived, and the Bears scurried away with the narrow, one-goal win.

Nappier delivered 30 saves for the Penguins, while Copley turned away 22 shots for Hershey to earn the win.

The decisive game in the Penguins’ and Bears’ Atlantic Division First Round series is tomorrow, Monday, May 9. Game 3 puck drop is scheduled for 7:05 p.m. at Mohegan Sun Arena at Casey Plaza.