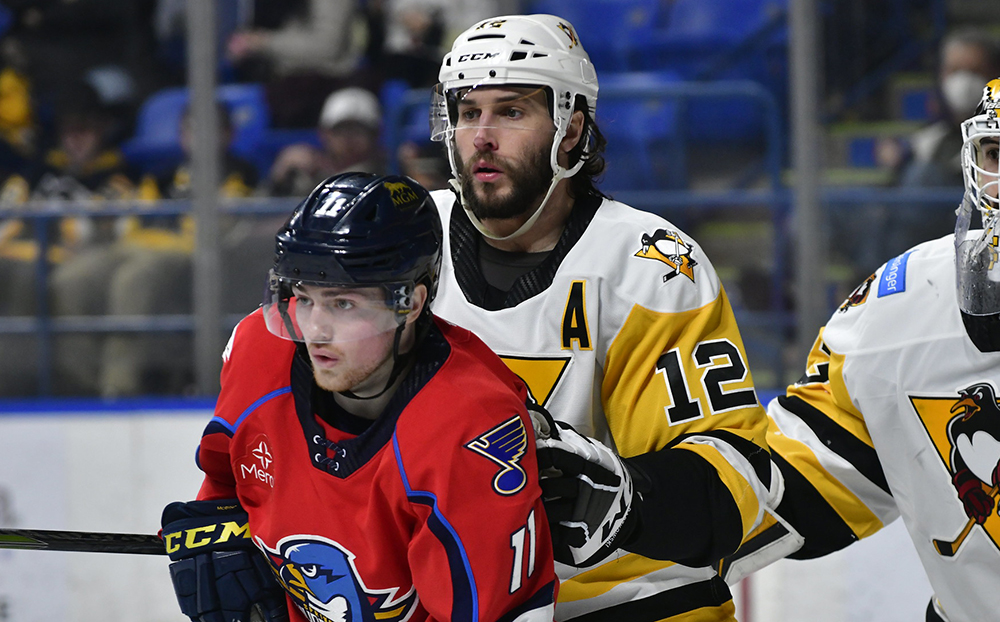 The Wilkes-Barre/Scranton Penguins and Springfield Thunderbirds will face off in the Atlantic Division Semifinals starting on Wednesday night in Massachusetts.

This is the first playoff meeting between the Penguins and Thunderbirds.  In fact, it’s the first Calder Cup playoff appearance for the Thunderbirds since the team joined the AHL in 2016.  The last time a Springfield-based club made the postseason was 2014, when the Falcons finished atop the Northeast Division.

The Penguins posted a 4-1-0-1 mark against the Thunderbirds during the regular season, which included a pair of victories beyond regulation (one in the shootout, one in overtime).

Felix Robert led all scorers in the series with three goals and six points, while Sam Anas paced the Thunderbirds with five points – all assists.

Goaltender Joel Hofer appeared in all six games for Springfield, posting a 2-0-3 mark with a 2.97 goals against average.

In the other net, the Penguins rotated six different goaltenders against the Thunderbirds, including PTO signee Matt Jurusik, who posted a 28-save shutout in his AHL debut on December 12.

Tommy Nappier was between the pipes for the Penguins’ 3-2 shootout win on February 19.  The playoff starter stopped 30 shots through regulation and overtime, then turned aside all three attempts he saw in the shootout round.

Sam Anas finished the regular season ranked eighth in the league with 44 assists, while teammate Matthew Peca cracked the top 20 with 37 helpers.  Anas also finished in a tie for 12th overall with 64 points on the season.

Individual tickets and full playoff packages for the Penguins’ postseason run are on sale now.

Penguins Playoff Packages include tickets to all potential home games during the Calder Cup Playoffs. This package includes a ‘Pay-As-We-Play’ plan, meaning your credit card will not be charged until a game is guaranteed to be played.

Also included for each game in the plan is a $6 voucher per seat, good for use at any SAVOR-run concession stand, or at the Penguins Team Store inside the arena. Vouchers are good only for the game for which they are issued and cannot be carried over to future games.

To purchase playoff packages or individual game tickets, call 570-208-7367 or request more info through the form below.