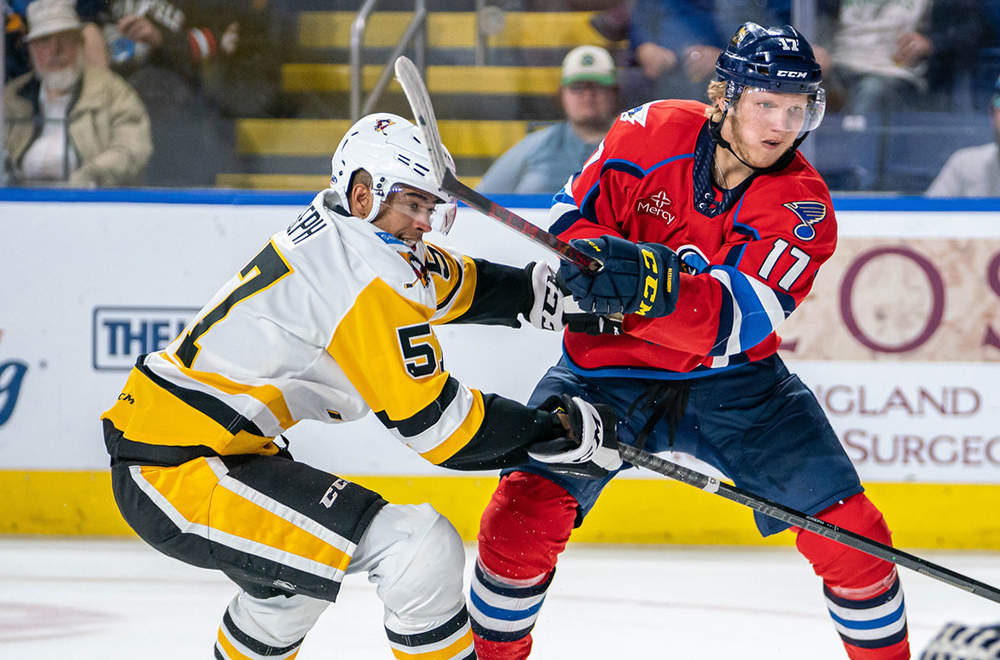 SPRINGFIELD, Mass. – The Wilkes-Barre/Scranton Penguins fell to the Springfield Thunderbirds, 6-2, in Game 2 of their Atlantic Division Semifinals series on Thursday night at MassMutual Center.

For the second night in a row, Springfield’s goalie stole the show. Joel Hofer made 34 saves and scored the second goalie goal in Calder Cup Playoffs history, stealing the headlines from the offense created by Wilkes-Bare/Scranton’s defensemen.

The Thunderbirds now hold a 2-0 lead in the best-of-five playoff series.

Just like in Game 1, Springfield opened the scoring with a power-play goal. Matthew Peca swatted in a backdoor pass with 1:47 left in the first period, giving the T-Birds a 1-0 edge.

Wilkes-Barre/Scranton seized its first lead of the series thanks to back-to-back goals from the blueline. First, Will Reilly ripped a shot through traffic and past Hofer at 4:56 of the second period. Midway through the middle frame, Pierre-Olivier Joseph zipped one to the far corner and put the Penguins ahead, 2-1.

However, Springfield quickly flipped the script and turned its one-goal deficit back into a one-goal lead. Tommy Cross tied the game with a power-play goal at 16:57 of the second stanza, and Mackenzie MacEachern converted on a breakaway 42 seconds later.

After a pair of unsuccessful Penguins power plays in the third, Nikita Alexandrov buried a rebound to put the T-Birds up, 4-2, at 10:49.

Down by two with still four minutes to go in regulation, Wilkes-Barre/Scranton pulled its goalie for an extra attacker. Hofer used this opportunity to make history and whipped the crowd into a frenzy when he shot the puck from behind his cage into the Penguins’ empty net at the other side of the ice.

Luke Witkowski tacked on another empty netter for Springfield to round out the scoring.

Wilkes-Barre/Scranton will be facing elimination when it comes home for Game 3 of the Atlantic Division Semifinals on Sunday, May 15. Puck drop between the Penguins and T-Birds is scheduled for 7:05 p.m.

DECISION TO STAY IN PITTSBURGH A NO-BRAINER FOR RUHWEDEL