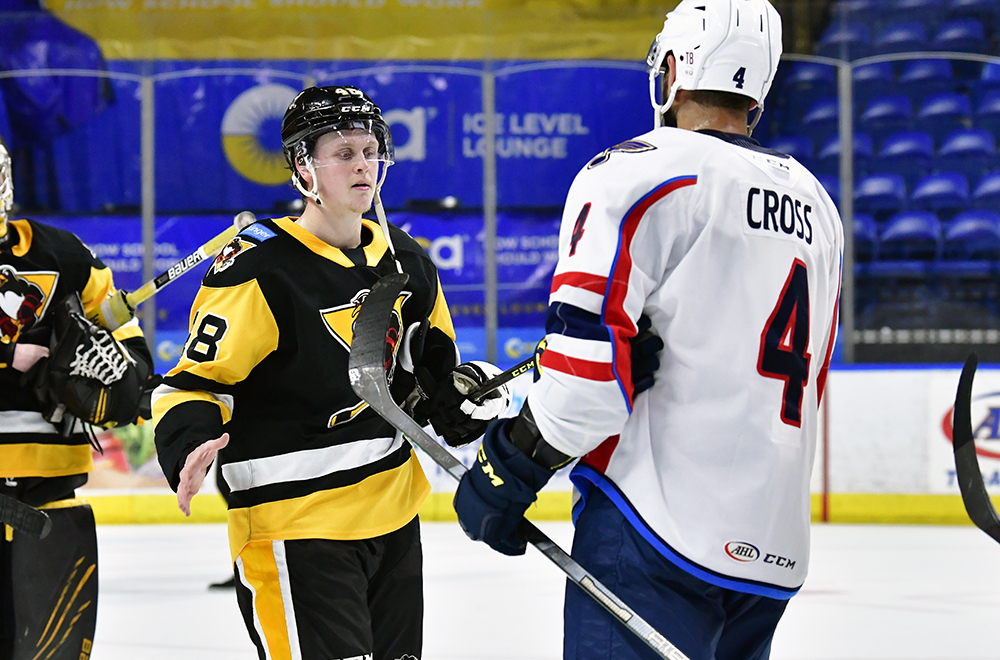 WILKES-BARRE, Pa. – The Wilkes-Barre/Scranton Penguins’ season ended in wild fashion, dropping a 7-6 decision to the Springfield Thunderbirds in Game 3 of the Atlantic Division Semifinals at Mohegan Sun Arena at Casey Plaza on Sunday night.

The Penguins showed elimination-game urgency from the start, and their intensity paid off almost instantly. Jonathan Gruden opened the scoring 2:45 into the game.

Springfield pulled even on a power-play goal from Sam Anas at 8:27 of the first period.

Filip Hållander put Wilkes-Barre/Scranton back ahead, 2-1, midway through the opening frame. Hållander then set-up Sam Poulin for the team’s first man-advantage marker of the series at 14:31 of the first.

The T-Birds were given four power plays during the second period, the last of which started their rally. Will Bitten knocked in the puck at the side of the Penguins’ net during a five-on-three man advantage. The goal was subjected to a lengthy video review, but ultimately, the call on the ice stood.

Two and a half minutes later, Steven Santini blasted a slapshot through traffic to pull Springfield within one. Dakota Joshua notched the tying goal at 17:15 of the second period by knifing the puck across Wilkes-Barre/Scranton’s goal line.

Springfield jumped out to a two-goal lead in the third with rebound deposits from Matthew Peca and Mackenzie MacEachern.

Poulin answered back and quickly pulled the Penguins within one, 6-5, with his second power-play goal of the evening. However, the T-Birds reestablished their two-goal edge with a man-advantage marker strung together by a series of slick passes that ended on Hugh McGing’s stick. That left the Penguins with 8:45 to stage a comeback.

Alex Nylander notched his third goal of the postseason and made it 7-6 with 6:26 left to go, but a tying goal never materialized.

Before losing to Springfield, Wilkes-Barre/Scranton defeated the Hershey Bears in the Atlantic Division First Round. The best-of-three series ended in dramatic and thrilling fashion, with the Penguins taking the third game over their in-state rival on home ice in overtime. Nylander’s dagger to the Bears will be a lasting memory throughout the offseason until the Penguins resume play in the fall.