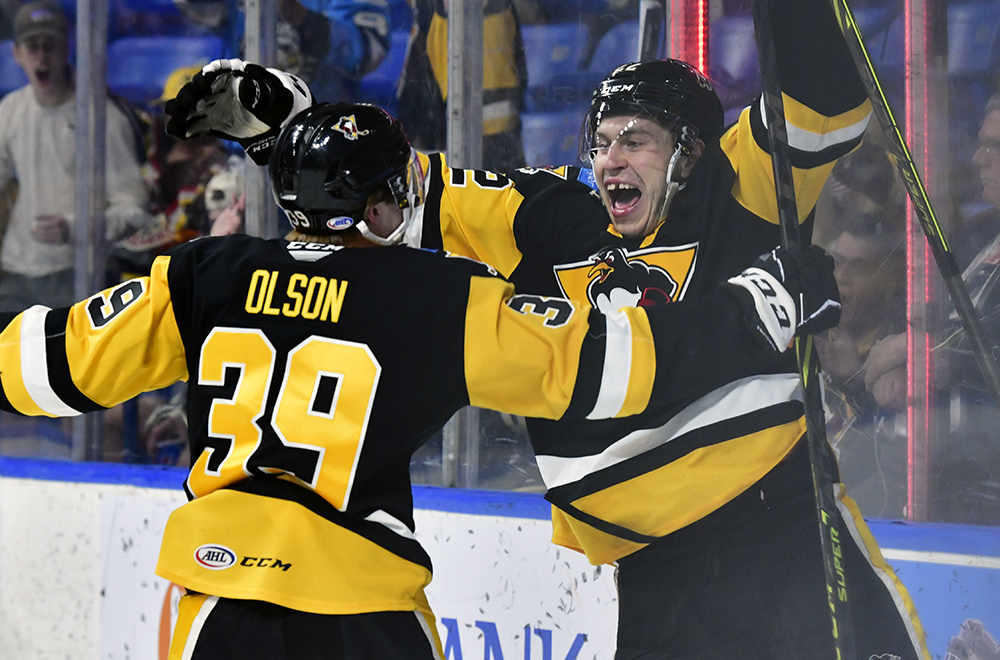 WILKES-BARRE, Pa. – There are a lot of words you could use to describe the Wilkes-Barre/Scranton Penguins’ 2021-22 season.

Depending on what time of year you’re talking about, you may have very different words on your mind.

This past season was the first time the team was back to playing a full, 76-game schedule in what seemed like forever. So as one starts to reflect om the 2021-22 campaign in its entirety, it’s easy to forget every twist and turn on their path.

That being said, any interpretation of the season has to recognize on major thing: It was all about the bounce back.

No one can engage in any good-faith discussion about the Penguins’ 2021-22 season without acknowledging the team’s outlook in December and January. Mired in a litany of covid postponements, the club dropped five of its six games in December. This led to an eight-game losing streak in January, a skid that plummeted Wilkes-Barre/Scranton to the bottom of the league standings.

It wasn’t pretty, but anyone who knows hockey (or anyone who followed this Penguins season) knows there are too many games left to write an obituary in January.

The Penguins banded together over the next several months, nearly perfected a gritty and suffocating brand of hockey that gradually propelled them back into postseason contention. By the end of 76 games, Wilkes-Barre/Scranton had climbed all the way back to have home-ice advantage in the first round of the Calder Cup Playoffs.

It was an extremely commendable turnaround, with the effort, discipline and commitment shown by the players worthy of celebrating. Once the team had officially clinched their playoff spot, Penguins head coach J.D. Forrest reiterated how proud he was of his team every time a camera or microphone was placed in front of him.

Of course, the team was spurred by the progress of many individuals on the team. The American Hockey League loves to tout itself as a developmental territory, and has never been more on display than the second half of Wilkes-Barre/Scranton’s season.

Sam Poulin, a first-round pick in 2019, struggled to put up points and solidify a role on the team early in his first season as a pro. He then rattled off 30 points (12G-18A) in the New Year, tied for most on the team. Filip Hållander also found his scoring touch, coupling 10 second-half goals with his diligent, three-zone play. Jonathan Gruden carved out a niche as an unrelenting forechecking force as well as a stalwart penalty killer at barely 22 years of age. The same can be said of Kyle Olson, only one year older than Gruden. Kasper Björkqvist, Valtteri Puustinen and Hållander all earned their NHL debuts in 2022.

Those are only a few of many names who elevated their game as the Penguins charged up the standings.

The positives started right from Game 1 of the playoffs, in which rookie goaltender Tommy Nappier made team history. Nappier became the first goalie in the franchise’s storied history to record a shutout in his Calder Cup Playoffs debut, as he blanked the Hershey Bears at Mohegan Sun Arena at Casey Plaza.

The next time Wilkes-Barre/Scranton returned home, there was an even more memorable moment sewn into the minds of its faithful fans. A do-or-die Game 3 came down to sudden death overtime following a shocking Hershey comeback in the final two minutes of regulation. Completely unfazed by the shocking turn of events, the Penguins came out of the locker room for the extra frame and dominated possession from the start. This signature, unrelenting pressure that the team used to put themselves back into playoff contention eventually culminated in Alex Nylander sniping a bar-down, series-clinching beauty in OT.

After a spirited on-ice celebration, the Penguins had to quickly turn their attention to their second-round opponent, the Springfield Thunderbirds. Fewer than 48 hours removed from their overtime thriller, Wilkes-Barre/Scranton stormed Springfield in Game 1 with a whopping 51 shots on goal. Unfortunately, this is where the disappointments begin, as the T-Birds’ goalie only let one of those 51 shots sneak past him, thus stealing Game 1 in the process.

The Penguins returned to NEPA down 2-0 in the best-of-five series, giving way to a wild elimination game on home ice. When the dust settled at the end of an offensive onslaught, the black and gold were on the losing end of a 7-6 decision.

For some, another playoff loss sounds like a haunting refrain to a song heard far too often. But the 2021-22 Wilkes-Barre/Scranton Penguins deserve another listen. When lesser teams would have packed it in and started daydreaming about summer vacations, the Penguins outright refused to remove themselves from the fight. They willed themselves back into the playoff conversation, and then delivered big win after big win in order to secure that postseason bid.

Given the sheer length of the season and all of the dramatic swings contained within, it’s hard to summarize everything that happened. J.D. Forrest gave it his best shot anyway. When asked if he could find one word to describe this version of Penguins hockey, he paused for only a brief moment before offering his sage response.

Of all the words one could choose to describe this past season, there is none better than that.