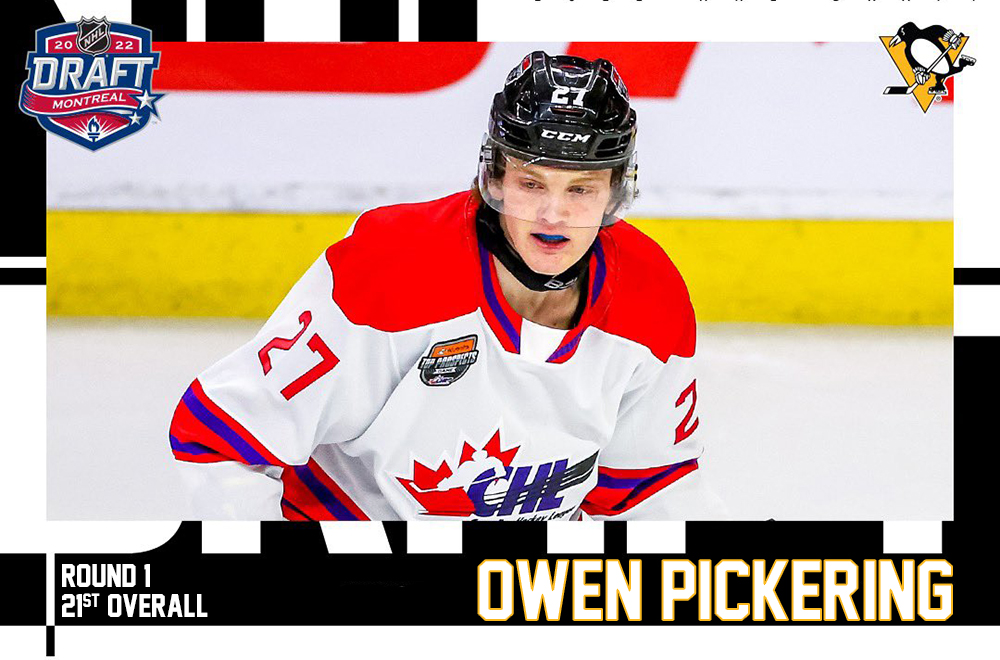 PITTSBURGH, Pa. – The ink freshly dried on his new, six-year contract extension, Kris Letang stepped to podium at center stage in his hometown of Montréal, Québec. The most prolific defenseman in Pittsburgh Penguins history leaned into the microphone and introduced a new blueliner for the Penguins’ future. With the 21st overall selection in the 2022 NHL Entry Draft, Pittsburgh chose defenseman Owen Pickering.

Pickering plays major junior hockey for the Swift Current Broncos of the Western Hockey League. The Broncos had a tough year overall, finishing 15th of 22 teams and missing the playoffs, but Pickering still managed to lead the team’s defensemen in goals (9), assists (24), points (33) and shots on goal (120) as a 17, 18-year-old.

The native of St. Adolphe, Manitoba measured in at 6-foot-4, 180 lbs. at the NHL Combine. That size doesn’t hinder his skating ability, though. The greatest hallmark of Pickering’s game is his fluidity. He can change directions on a dime and explodes out of a stationary stance to shut down any oncoming attack. He shows really good positional awareness, and his wide wingspan gives him a vast circumference of coverage.

“We feel like there’s a lot of upside,” said Penguins general manager Ron Hextall to ESPN. “Obviously, he’s a big kid. He’s got good puck skills, and we think he’s going to be a real good, 200-foot player.”

As a draft pick out of the WHL, Pickering is not eligible to play in the American Hockey League until 2024-25, when he is 20-years-old.

Pickering is the first of five selections Pittsburgh is slated to make at this year’s draft. Barring any trades, the Penguins will pick again in the fourth (118th), fifth (150th), sixth (185th) and seventh rounds (214th). Day two of the 2022 NHL Entry Draft still start at approximately 11:00 a.m. on Friday, July 7.

See Pickering on the Ice