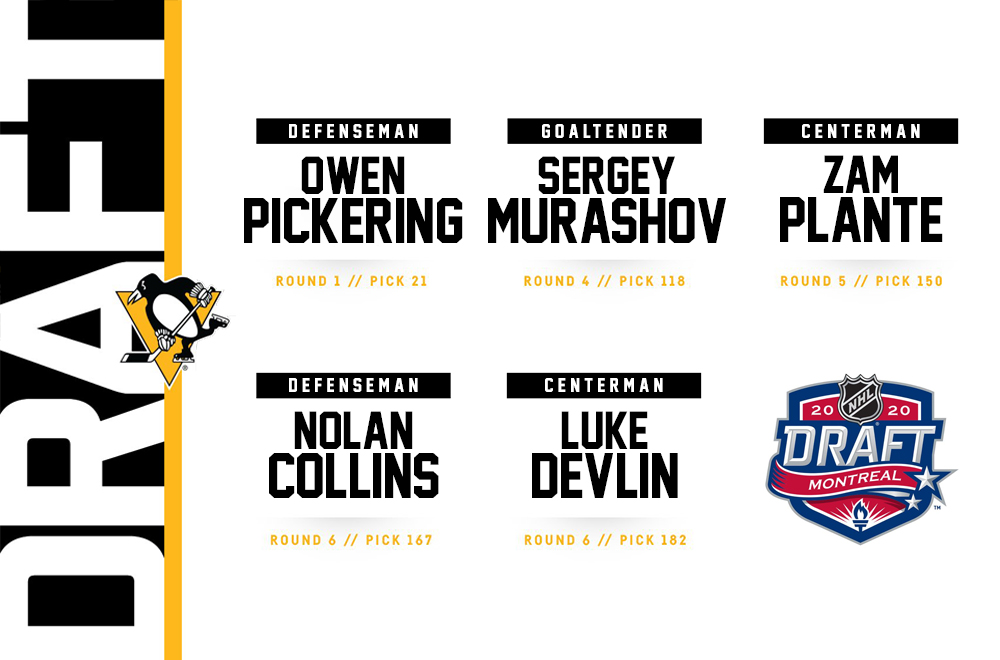 PITTSBURGH, Pa. – The 2022 NHL Entry Draft is in the books, and there are five new members of the Penguins organization. In rounds, one, four, five and six, the Pittsburgh Penguins made the decision to draft two forwards, two defensemen and one goalie.

Here’s a quick look at the young men who hope to wear the Black and Gold with pride in coming years.

The Penguins’ first selection in this year’s draft was made on Thursday night, and the player they wanted was defenseman Owen Pickering.

He’s tall and lanky with a gigantic wingspan, but his skating ability really stands out. Pickering moves fluidly in all directions, and uses that athleticism to smother opponents’ offensive chances. He shows good vision, too, acutely moving the puck away from danger and up ice. Despite playing on a non-playoff team, Pickering still led the Swift Current Broncos’ defensemen in goals (9), assists (24) and points (33).

This was just the second first-round pick made by Pittsburgh since 2015, the last of which was also made at 21st overall in 2019. That player? Wilkes-Barre/Scranton’s top rookie from last season, Sam Poulin.

We published a slightly more in-depth look at Pickering during the first round yesterday.

Murashov is billed at six-feet tall and roughly 160 lbs., which puts him on the “smaller” side in today’s era of goliath goalies. He makes up for his diminutive dimensions with lightning-quick movement. He explodes from post-to-post in the blink of an eye, and isn’t afraid to play aggressive atop his crease to cut down angles on shooters.

His aggressive, reflexive style translated to shining numbers in Russia’s junior league this past season. Playing for Loko-76 Yaroslavl, he registered a 2.49 goals against average, .927 save percentage and six shutouts.

He’s on more of a long-term development curve, billed at 5-foot-9 but with room to grow, but that isn’t to say his game isn’t advanced. Plante’s speed and skill jump out at you right away (and allowed him to dominate the Minnesota high-school hockey scene,) but scouts who saw him a lot rave about his hockey sense. He’s a dogged forechecker and very attuned to his defensive responsibilities. In summary, Zam Plante is a player who does a lot of the things that coaches love.

This season, Plante racked up 24 goals and 40 assists for 64 points in just 22 games for the Hermantown Hawks. He won’t turn 18 until late August this year, making him one of the youngest players in this draft.

Plante, the son of former NHLer Derek Plante, is committed to the University of Minnesota-Duluth. Zam will likely spend another year in the USHL with perennial powerhouse the Chicago Steel before going to Duluth in 2023-24.

Surprise! A trade! Pittsburgh dealt 2018 sixth-rounder Liam Gorman to the Chicago Blackhawks for the 167th pick in this year’s draft. The Penguins promptly used that pick on defenseman Nolan Collins.

Collins is a bit of a sleeper pick, but for good reason. The six-foot-three, right-handed blueliner didn’t play at all during the 2020-21 season, as the Ontario Hockey League had its season completely wiped out by the pandemic. That would have been Collins’ first experience with major junior hockey, but it had to wait until this season when he was 17-years-old.

Collins found his groove late in the year, as he posted 13 of his 18 total points in his last 23 games of the season. After he lost such an important year in his development, his late-season surge likely convinced Penguins scouts that he’s trending upwards.

Described as a “power center”, Luke Devlin is a big, heavy body and likes to use that frame to his advantage. He was over a point-per-game while playing prep hockey with St. Andrew’s College this season (19G-28A), before making brief stints in the USHL with the Des Moines Buccaneers and the U.S. National Team Development Program.

Given his size and playing style, it’s no surprise that Devlin is committed to Cornell University.

Satisfied with their haul, Hextall dealt the Penguins’ last pick (seventh round, 213th overall) to the Florida Panthers in exchange for a seventh-rounder next year.