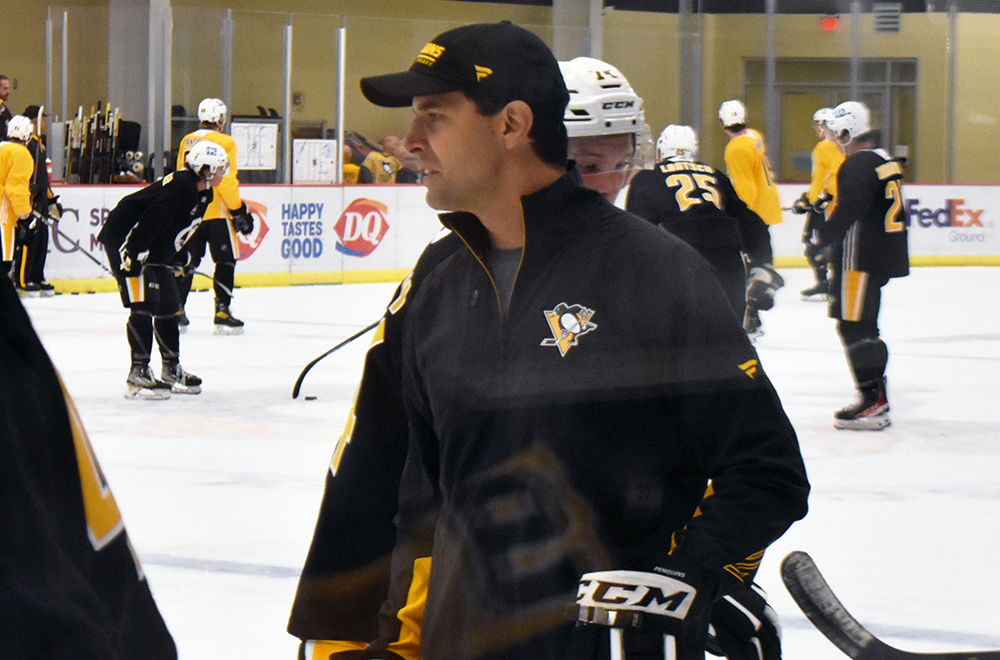 PITTSBURGH, Pa. – Tom Kostopoulos had a 19-year career in pro hockey, including over 600 games in the National Hockey League. However, he had to grind for close to five years before solidifying himself as a regular NHLer.

Now that his playing days are over, he’s climbed the ranks in the Pittsburgh Penguins front office at a similar pace.

Kostopoulos was promoted to the Penguins Director of Player Development in late June, taking over the role from the departed Scott Young. Kostopoulos had spent the past four seasons as Development Coach, working with the team’s prospects not only in Wilkes-Barre/Scranton, but also throughout college and major junior ranks.

This year’s development camp was Kostopoulos’ first in his new role, but also the club’s first since 2019. Kostopoulos, 43, said that the players at the camp would use this week to understand what the organization expects from its players, especially in the categories of compete level and work ethic. Moreover, he wanted to use this camp as an opportunity to show these players how hard he and the team’s staff will work for them, as well.

“We really wanted them to get to know how things work here and know that we’re all here for them,” Kostopoulos said. “It’s basically letting them know that there’s all these resources, there’s a team of people here for them. We’ll do anything we can to help them develop and reach the potential as a hockey player and young men.”

Kostopoulos knows all about development from his accomplished playing career. Growing up in Mississauga, Ontario, hockey came naturally. He idolized the Toronto Maple Leafs, particularly Wendell Clark, and eventually left home to play junior hockey. It took until his final year of draft eligibility to hear his name called by an NHL team, but Pittsburgh took a flyer on Kostopoulos in the seventh round of the 1999 draft.

He turned pro that fall and joined the Wilkes-Barre/Scranton Penguins for their inaugural season. It didn’t take long for Kostopoulos’ hard-nosed and unrelenting style to win over the hearts of Northeastern Pennsylvania hockey fans, and eventually, he parlayed that style into a long NHL career. Kostopoulos is one of four players in hockey history to play 600 games at both the NHL and AHL levels.

Now, Kostopoulos uses the lessons he learned over that 19-year career to help the Penguins of tomorrow reach their ceilings.

“Tom has done an excellent job developing and monitoring players at the minor league and amateur levels over the past four years,” Pittsburgh General Manager Ron Hextall said via press release. “His work ethic and experience coming up through the ranks during his career serve as a great example for our players. We are excited to have him lead our player development staff.”

OTHER NOTES FROM DEVELOPMENT CAMP

• The pandemic meant that this was the first organized, team gathering for several prospects, including Lukas Svejkovsky. The 2020 fourth-rounder used this week to showcase his abundance of skill for the Pens’ brass. His puck handling and agility made him stand out in every drill, and then he was a consistent catalyst of offense in the camp-ending scrimmage on Thursday.

Svejkovsky will turn pro this season and could join Wilkes-Barre/Scranton in the fall.

• One player who is not eligible to join the AHL this season but still caught a lot of attention was defenseman Owen Pickering. As Pittsburgh’s first-round pick (21st overall) at this summer’s draft, he had a lot of eyes on him at camp. During the week, he showcased the skating ability that had scouts raving before the draft, as well as a long reach and deft defensive touch in his own zone.

The young man came as advertised. There’s a lot of potential here.

“Confidence would be No. 1. I think he has a great skillset, a great gameplan, and he’s a great human being, as well. … Over five years, he’s played a lot of games and had a great track record the whole way.”

• Ty Glover was another player the Penguins signed last spring, and he was able to join Wilkes-Barre/Scranton for his pro debut late in the 2021-22 regular season. Glover, a product of Western Michigan University, was filling the net all week at Development Camp. He flashed his scoring ability again with a blazing shot during a breakaway in the scrimmage.

Kostopoulos had a lot of positive things to say about Glover, but made a point to call out his performance in the team’s flag football game on Tuesday. The Penguins’ newly appointed Director of Development went as far as calling him “a beast” on the (flag) gridiron.