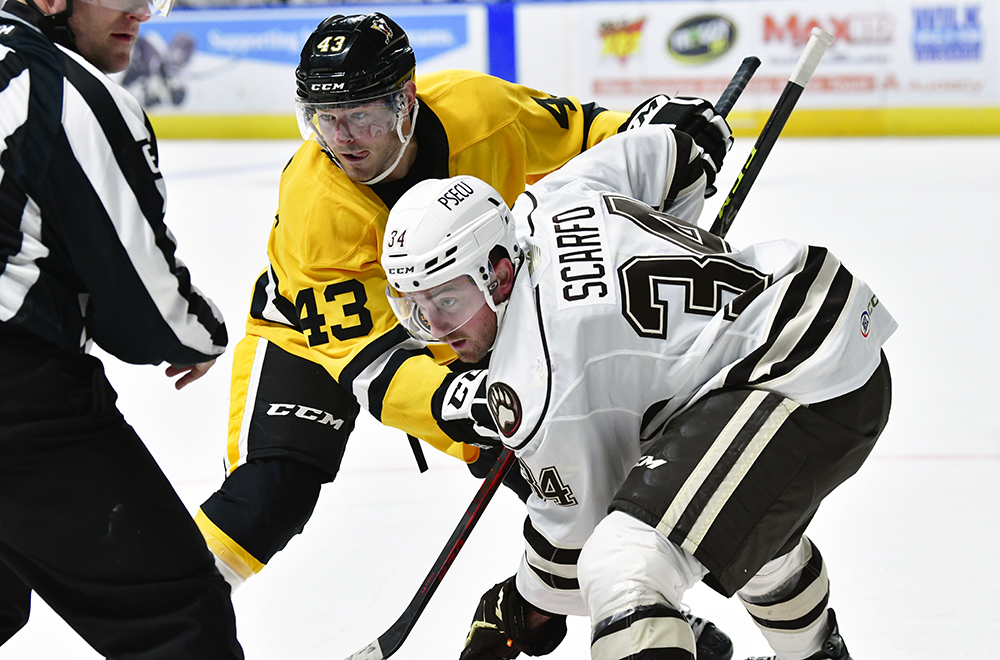 WILKES-BARRE, Pa. – The Wilkes-Barre/Scranton Penguins defeated the Hershey Bears, 3-2, in their preseason opener on Wednesday morning at Mohegan Sun Arena at Casey Plaza.

Preseason Opener Ends In a Win

Wednesday was Wilkes-Barre/Scranton’s first ‘Learn With Hockey’ STEM & School Day Game with over 2,000 students from local schools in attendance for the game’s 10:30 p.m. puck drop. Though the Penguins fell behind in both the first and second periods, they showed constant resolve throughout the day en route to victory.

As the two teams acclimated to the early-morning start, the first period was marred by special teams. The Penguins failed to cash-in on three first-period man advantages, but Hershey’s Riley Sutter opened the scoring with a power-play goal at 13:53.

The game opened up in the second period and featured a scoring frenzy of three goals in 1:11 seconds of game time.

First, Max Johnson unleashed a one-timer to put the Penguins on the board at 9:13 of the middle frame, but Julian Napravnik answered back for the Bears 26 seconds later.

Within a minute of Hershey reestablishing its lead, Justin Addamo buried a one-timer to pull the Penguins even, 2-2.

Just as it seemed Hershey was about to clap back with another goal, Wilkes-Barre/Scranton goalie Tommy Nappier stymied the scoring onslaught by denying the Bears on a two-on-one rush with a dazzling glove save.

Corey Andonovski gave the Penguins their first lead of the day by cleaning up a rebound three minutes into the third period.

Wilkes-Barre/Scranton was forced to stave off two more penalty kills before the end of regulation, but the team blocked as many shots as it could in order to secure the win.

Johnson and Andonovski led the way for the Penguins offense, both tallying two-point days with one goal and one-assist.

The Penguins’ next preseason game is on Friday, Oct. 7 against the Lehigh Valley Phantoms. Game time for the Penguins and Phantoms is scheduled for 7:05 p.m. at Mohegan Sun Arena at Casey Plaza.

Wilkes-Barre/Scranton opens its regular season at home with another game against Lehigh Valley on Saturday, Oct. 15. Puck drop for the Penguins’ season-opener is slated for 6:05 p.m.