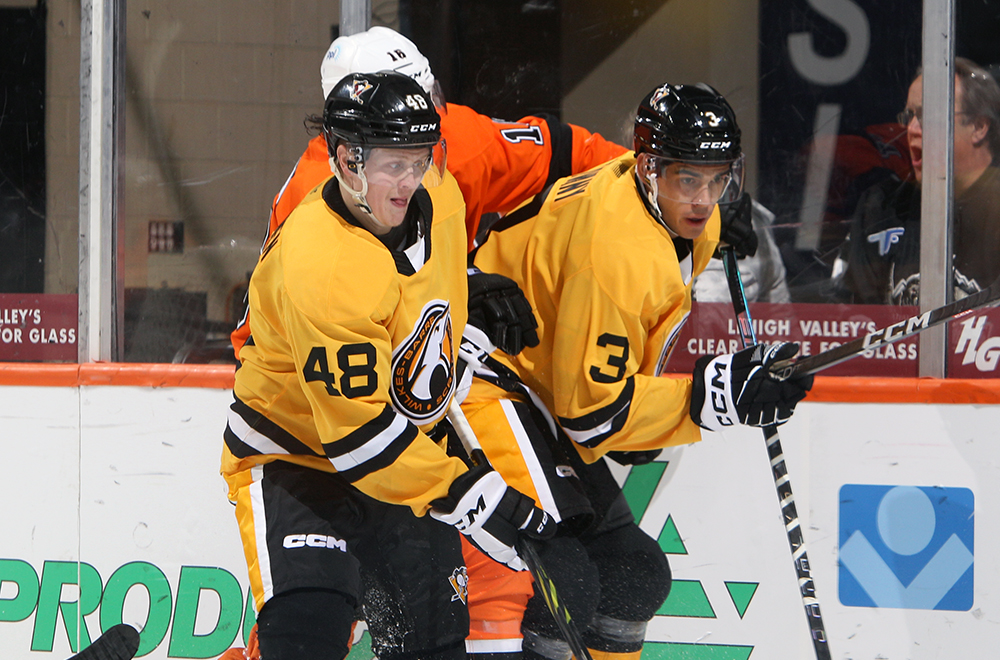 ALLENTOWN, Pa. – The Wilkes-Barre/Scranton Penguins sustained their first loss of the preseason in their fourth and final exhibition game, dropping a 2-1 decision to the Lehigh Valley Phantoms on Wednesday night at PPL Center.

Wilkes-Barre/Scranton went to the penalty box seven times over the course of the game. Its penalty kill was perfect through its first six trials, but the seventh opportunity ultimately led to the winning goal for Lehigh Valley.

The Phantoms snapped a longstanding stalemate at 16:34 of the second period with a booming slap shot from the point. Cam York’s rifle from the blue line was tipped in front by Tyson Foerster, and the puck found its way under the crossbar and in.

The Penguins equalized on a bang-bang play created by the hustle of the line of Valtteri Puustinen, Filip Hållander and Sam Poulin. Poulin won an icing race and immediately spun the puck back to defenseman Taylor Fedun. Wilkes-Barre/Scranton’s captain released a fluttering shot that was tipped in front by Hållander, stopped by Phantoms goalie Pat Nagle, but Puustinen was in the arena to whack in the rebound.

Late in regulation, the Penguins were called for their seventh penalty of the game. This resulted in another shot from York that was redirected into the Penguins’ cage with 54.4 seconds left in regulation. Zack MacEwan was credited with the game-winning deflection.

The Penguins out-shot the Phantoms 26-25, despite being awarded only two power plays to Lehigh Valley’s seven.

Dustin Tokarski played the whole game for the Penguins, steering aside 23 shots in the process. Troy Grosenick denied all 18 shots faced through two periods and was replaced by Nagle at the start of the third. Nagle denied seven of the eight bids thrown is way.

Wilkes-Barre/Scranton opens its regular season at home with another matchup against Lehigh Valley on Saturday, Oct. 15. Puck drop for the Penguins’ season opener is slated for 6:05 p.m. at Mohegan Sun Arena at Casey Plaza.