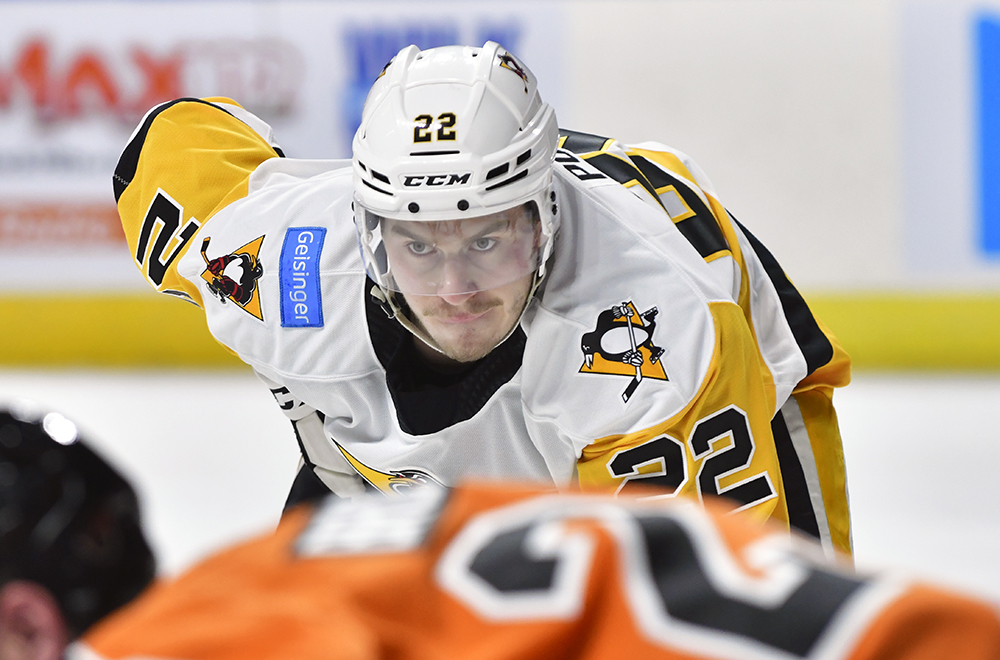 WILKES-BARRE, Pa. – The Wilkes-Barre/Scranton Penguins showed the same resiliency from last season in their 2022-23 season opener, but still lost in overtime to the Lehigh Valley Phantoms, 3-2, on Saturday night at Mohegan Sun Arena at Casey Plaza.

Wilkes-Barre/Scranton controlled the puck for most of the game and out-shot Lehigh Valley 38-20 by the end of regulation. The Penguins required an extra-attacker goal to force overtime, as an equalizer from Sam Poulin with 59.5 seconds left in regulation.

Poulin’s late-game tally was one-upped by the Phantoms’ Louie Belpedio, who scored the game-winner with only 1.4 seconds left in overtime.

The game started to a raucous ovation from the home crowd, and the Penguins raced out to an 8-1 lead in shots. Troy Grosenick held down the fort for the Phantoms until they could steady themselves, keeping Wilkes-Barre/Scranton off the board. Eventually, Elliot Desnoyers opened the scoring for Lehigh Valley at 13:41 of the first period.

Alex Nylander solved Grosenick with a snipe on the power play at 5:35 of the middle frame, tying the game at 1-1. The celebration didn’t last long, as Zack MacEwan responded with a man-advantage marker of his own midway through the game to put Lehigh Valley back ahead.

Grosenick continued to stonewall the Penguins through the rest of the second and most of the third, until Poulin knotted things up late in regulation. Ty Smith had a shot hit the post to Grosenick’s left, only for it to careen to an area where Poulin could swat it out of mid-air and to the back of the net.

Belpedio was initially rebuffed on a breakaway in the dying embers of overtime, but Max Willman slid the puck back in front for the Phantoms defenseman to beat the buzzer with a one-timer.

Grosenick finished the game having made 38 saves on 40 shots faced. Penguins netminder Dustin Tokarski recorded 19 saves while being handed the overtime loss.

Wilkes-Barre/Scranton will hop on the bus tomorrow and travel to upstate New York for a matchup with the Utica Comets on Monday night. Puck drop between the Penguins and Comets is 7:00 p.m. on Oct. 17. The Penguins will return home on Friday, Oct. 21 when they take on the Laval Rocket. Game time for the Rocket’s only visit to Northeastern PA is 7:05 p.m. at Mohegan Sun Arena at Casey Plaza.