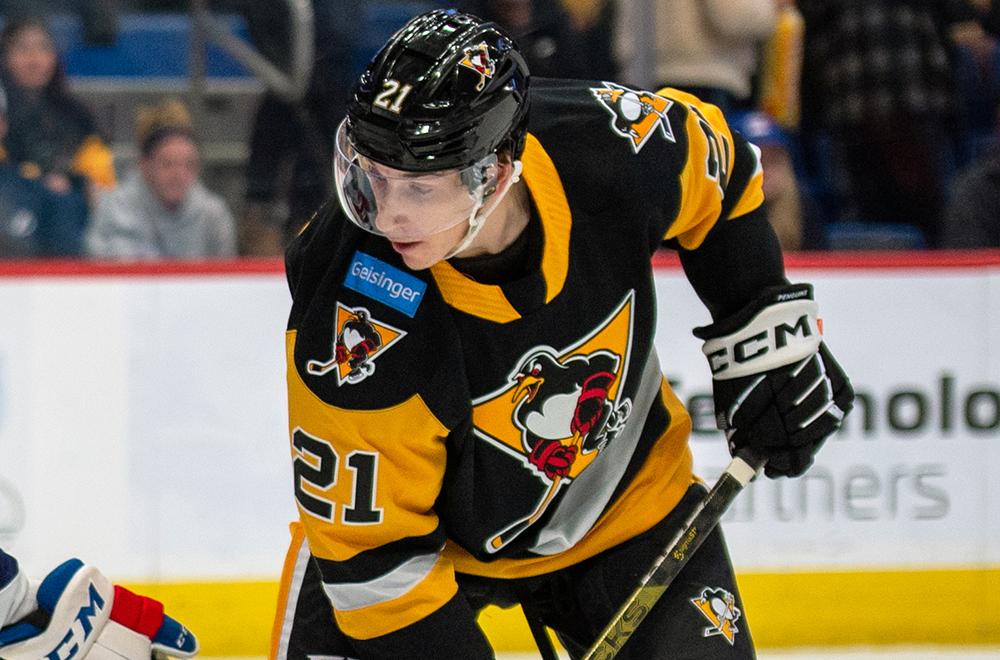 BOXSCORE HARTFORD, Conn. – The Wilkes-Barre/Scranton Penguins survived a late surge by the Hartford Wolf Pack to earn a 4-3, shootout win at XL Center on Saturday night.

Wilke-Barre/Scranton (2-0-1-0) had a three-goal lead evaporate as Hartford rallied to force overtime. Alex Nylander, who also tallied his third goal of the season in regulation, ultimately buried the only goal of the shootout to secure two points in the standings for the Penguins.

Corey Andonovski used his first pro goal to put the Penguins on the board with 2:30 left in the first period. After Ty Smith tightroped at the blue line to open a shooting lane, Andonovski got his stick on the ice and redirected Smith’s snapper past Wolf Pack goalie Louis Domingue.

Wilkes-Barre/Scranton opened the second period with aplomb, hemming Hartford in its defensive zone for minutes at a time. The unrelenting pressure eventually culminated in Nylander scorching a low shot past Domingue at 4:37 of the middle frame.

The Penguins kept their foot on the gas, forcing a bevy of Wolf Pack turnovers. One of those giveaways in the neutral zone turned into a breakaway for Filip Hållander, which he converted for a 3-0 Penguins lead.

The Wolf Pack broke the press with a power-play goal by Julien Gauthier with fewer than five minutes left before the second intermission. Hartford received another man advantage early in the third period, which turned into a C.J. Smith goal.

Goalie Filip Lindberg and the rest of the Penguins did their best to hold the Wolf Pack at bay during the rest of regulation, but Smith struck again with 2:37 left to force overtime.

Lindberg was tested early in the sudden-death frame with a two-on-one rush, but turned away Wolf Pack captain Jonny Brodzinski. Lindberg made another tremendous, post-to-post save on Gauthier later in OT, keeping the Penguins alive. The two clubs both notched four shots in the extra period, but none found twine.

After a scoreless first round of the shootout, Nylander tucked the game-winner with a silky backhand-forehand deke around Domingue. Lindberg cast aside all three Wolf Pack attempts.

Lindberg made 27 saves in regulation and overtime to earn his first victory of the season, while Domingue turned away 30 shots during 65 minutes of work.

The Penguins’ next home game is Wednesday, Oct. 26, when they welcome the Cleveland Monsters to town. Puck Drop for Wilkes-Barre/Scranton and Cleveland is slated for 7:05 p.m.