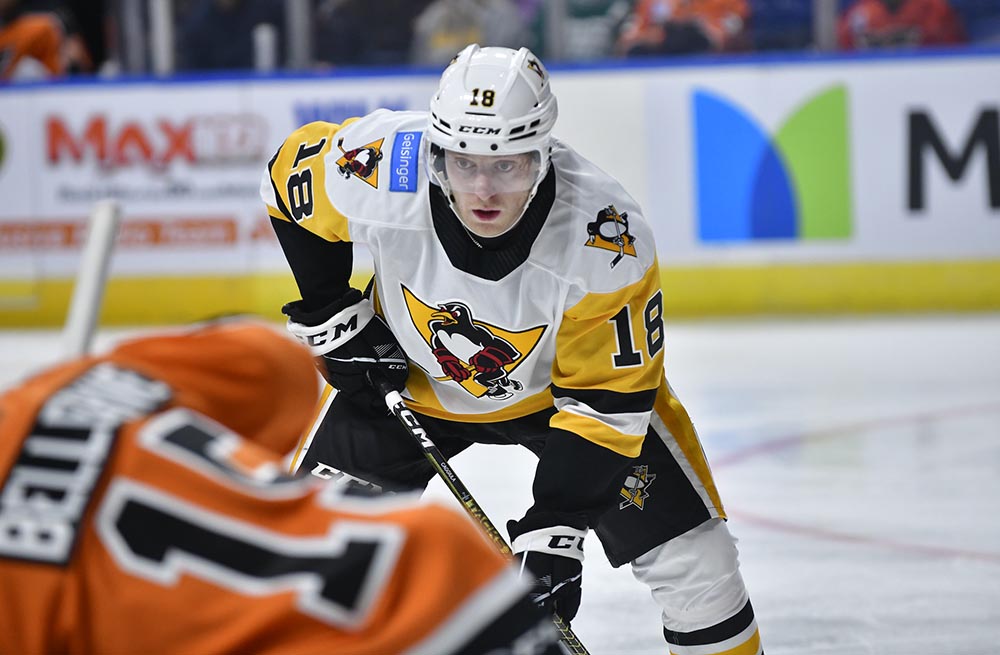 The Pittsburgh Penguins have recalled forwards Drake Caggiula (pictured) and Sam Poulin from the Wilkes-Barre/Scranton Penguins of the American Hockey League, it was announced today by general manager Ron Hextall.

Forward Teddy Blueger has been placed on long-term injured reserve retroactive to October 11.

Caggiula, 28, began the season in WBS where he has recorded one assist through four games. The 5-foot-10, 176-pound forward has played in 278 career NHL games from 2016-22 and registered 46 goals, 45 assists and 91 points with the Edmonton Oilers, Chicago Blackhawks, Arizona Coyotes and Buffalo Sabres. The undrafted forward’s best NHL season came in 2017-18 with Edmonton when he recorded career highs in games played (67), goals (13) and points (20).

Prior to turning professional, the Pickering, Ontario native played at the University of North Dakota from 2012-16. In 162 career collegiate games, Caggiula tallied 62 goals, 65 assists and 127 points.

Poulin, 21, is looking to make his NHL debut with Pittsburgh. The 6-foot-2, 213-pound forward has appeared in four games for the WBS Penguins this season, recording one goal. Last year, Poulin completed his first professional season with WBS, skating in 72 contests and recording 37 points (16G-21A).

Prior to his professional career, Poulin played four seasons in the Quebec Major Junior Hockey League with the Sherbrooke Phoenix and Val-d’Or Foreurs. In 192 career junior games, he recorded 88 goals, 141 assists and 229 points.

The Penguins’ next home game is Wednesday, Oct. 26, when they welcome the Cleveland Monsters to town. Puck Drop for Wilkes Barre Scranton and Cleveland is slated for 7:05 p.m.