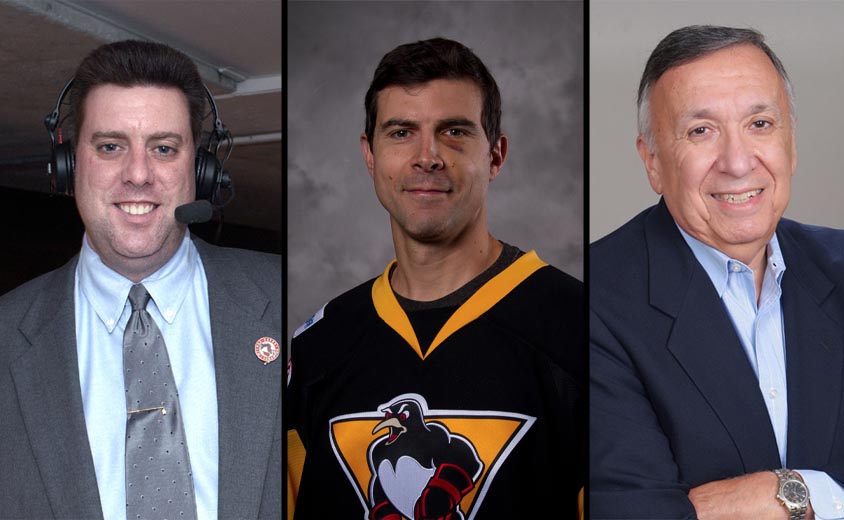 Tom Kostopoulos, Tom Grace and Steve Barrouk will become the newest members of the Wilkes-Barre/Scranton Penguins Hall of Fame, presented by McCarthy Tire, it was announced on Monday.

The trio will be honored at the 2022 Hall of Fame Dinner, presented by McCarthy Tire, on Friday, December 2 at Pacers Lounge inside Mohegan Pennsylvania (click for more info), and prior to the Penguins home game against the Bridgeport Islanders on Saturday, December 3.

A member of the Penguins’ inaugural squad in 1999-00, Kostopoulos served as team captain during the 2002-03 and 2003-04 seasons.  He joined the Manchester Monarchs for the 2004-05 season, before spending the next seven seasons exclusively in the NHL.

He rejoined Wilkes-Barre/Scranton briefly in the 2012-13 season, before being claimed on waivers by the New Jersey Devils.

He spent the final five seasons of his playing career back where it started in NEPA, service as team captain once again from 2013 until his retirement in 2018.

One of only four players to have appeared in 600 games in both the NHL and AHL, Kostopoulos currently serves as the Pittsburgh Penguins director of player development.

Grace was the ‘Voice of the Penguins’ and an important face in the community from 1999-00 through the 2006-07 season, and rejoined to the organization as the team’s broadcaster from 2010 through 2013.

Known for his unique goal calls and off the cuff sayings, Grace was behind the mic for the team’s trips to the Calder Cup Finals in 2001 and 2004.

He also served as host of the weekly ‘Penguins Report Radio Show’, and made hundreds of appearances at schools, social functions and official events for the club.

Grace called more than 1,000 games during his time with the Penguins, and was the recipient of the James H. Ellery Memorial Award (given to the individual or news outlet for outstanding coverage of a team) on three occasions (1999-00 for TV coverage with WBRE-TV 28; 2000-01 for TV coverage with Fox Sports Net Pittsburgh;  as an individual for radio coverage in 2001-02).

Prior to joining the Penguins, the native of Belmont, MA spent three seasons with the Hampton Roads Admirals of the ECHL.  He also spent four years calling games for the Boston College Eagles during his time in college.

Grace was also ‘called up’ to the NHL twice to broadcast games for the Nashville Predators.

Barrouk served as President & CEO of the Greater Wilkes-Barre Chamber of Business & Industry for two decades. During this time he played in integral role in the development of the Northeastern Pennsylvania Civic Arena and Convention Center, known today as the Mohegan Sun Arena at Casey Plaza, and served as chairman of the Luzerne County Convention Center Authority board.

He has served on the boards of the Wyoming Valley United Way, Catholic Social Services, the Children’s Service Center, Leadership Wilkes-Barre, Penn State Wilkes-Barre, and the Luzerne/Schuylkill Workforce Investment Board.

The Penguins’ next home game is Wednesday, Oct. 26, when they welcome the Cleveland Monsters to town. Puck Drop for Wilkes Barre Scranton and Cleveland is slated for 7:05 p.m.