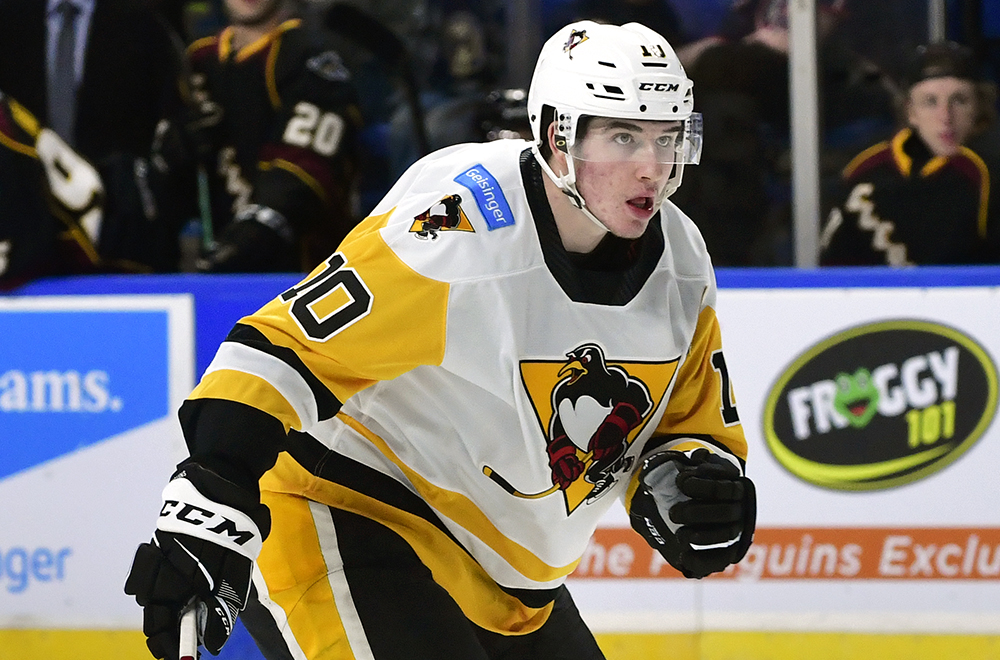 WILKES-BARRE, Pa. – Drew O’Connor led the Wilkes-Barre/Scranton offense with two goals and three points, as the home team extended their win streak to four by defeating the Cleveland Monsters, 5-1, on Wednesday night at Mohegan Arena at Casey Plaza.

Drew O’Connor for the Win

While O’Connor led the Wilkes-Barre/Scranton (4-0-1-0) offense, the Penguins’ penalty kill was just as spectacular, stymying the No. 2 power play unit the AHL on five of its six opportunities.

The first period was quite the start for the Penguins, as Ty Smith and O’Connor both found the net in short order. Smith notched his second goal of the season four minutes into the first period. O’Connor soared to a breakaway and used a silky, backhand move to beat Jet Greaves through his five-hole midway through the frame.

Wilkes-Barre/Scranton maintained its two-goal lead by holding Cleveland’s vaunted power play at bay on all three of its first-period attempts.

The Penguins extended their lead to 3-0 when Alex Nylander tipped in his fourth goal of the season at 4:32 of the second period. However, the Monsters responded by converting on their fourth man advantage of the night. Cole Fonstad was awarded the power-play tally 12:49 into the second stanza.

The Penguins staved off two more Monsters power plays in the second and third periods, and then went back on the offensive. Valtteri Puustinen scored in his second-straight game for a man-advantage marker eight minutes into the frame. Two minutes later, O’Connor knocked in a rebound to round out his three-point effort.

Cleveland’s frustration started to bleed through in the third period, and the heightened tensions culminated in Penguins forward Kyle Olson and Monsters defenseman Cole Clayton dropping the gloves for a spirited fight. The rest of the game cruised along without incident, and Wilkes-Barre/Scranton walked away with the win.

Penguins goalie Dustin Tokarski continued his impressive start to the season by stopping 32 shots.  Greaves recorded 23 saves for the Monsters.

Wilkes-Barre/Scranton is now 12-2-1-0 all-time against the Cleveland/Lake Erie Monsters franchise, including a 6-0-1-0 record on home ice.

The Penguins are back on the ice for their next game on Friday, Oct. 28 against the Lehigh Valley Phantoms. Puck drop between the Penguins and Phantoms is slated for 7:05 p.m. at PPL Center.

Wilkes-Barre/Scranton’s next home game is Saturday, Nov. 5, as they welcome the Hershey Bears to Mohegan Arena at Casey Plaza. Saturday’s game is also WWE Night, featuring a VIP Meet & Greet with WWE Superstar Johnny Gargano. Fans who wish to purchase tickets to the game and the Johnny Gargano VIP Meet & Greet can visit this link.