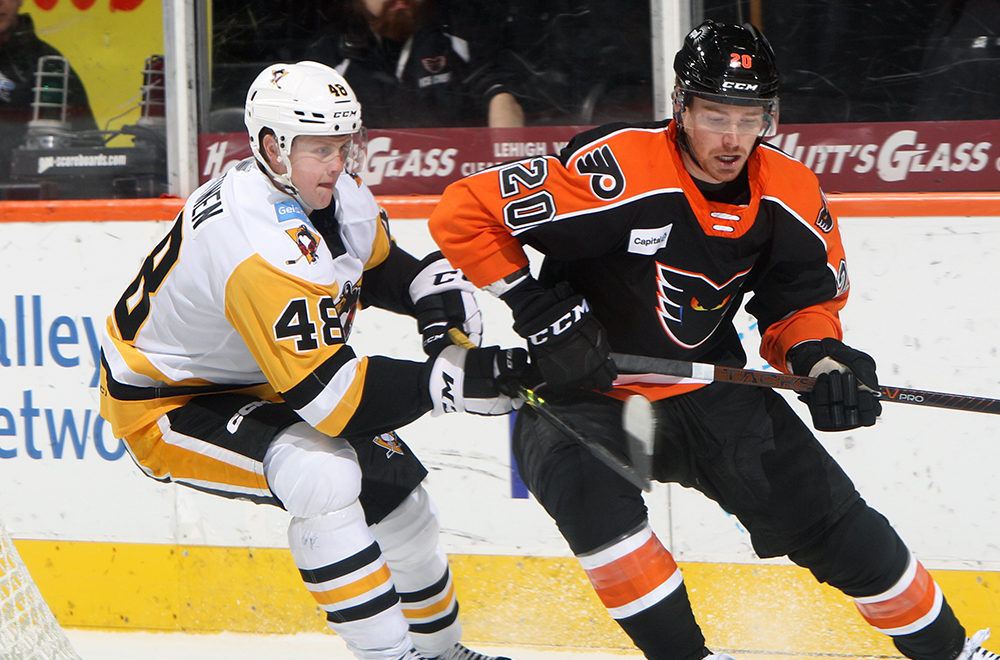 ALLENTOWN, Pa. – The Wilkes-Barre/Scranton Penguins used a pair of goals late in regulation to dispatch of the Lehigh Valley Phantoms, 3-1, on Friday night at PPL Center.

Tyler Sikura and Corey Andonovski both scored in the final three minutes of regulation to run Wilkes-Barre/Scranton’s win streak to five games. The Penguins are now 5-0-1-0 on the season.

Lehigh Valley notched the first goal of the night late in the first period. Max Willman capitalized on a turnover, drove to the net and slipped a puck across the line with 1:46 left in the frame.

Valtteri Puustinen pulled the Penguins even with a power-play goal at 14:06 of the second stanza. Phantoms goalie Sam Ersson made a pair of saves on Wilkes-Barre/Scranton, but the second rebound popped out to Puustinen, who lit the lamp for the third game in a row.

The game remained tied, 1-1, entering the home stretch of the third period. That’s when Andonovski forced a Phantoms miscue, which led to Filip Hållander feeding Sikura for a one-timer. With 2:33 left to go, Wilkes-Barre/Scranton had seized a 2-1 lead.

One minute later, Andonovski took flight for a breakaway and beat Ersson through his five-hole to put the game on ice.

Dustin Tokarski recorded 22 saves for the Penguins, while Ersson turned away 32 shots in the loss.

The Penguins will hit the ice again for their next game tomorrow, Saturday, Oct. 29, against the Hershey Bears. Puck drop between the Penguins and Bears is 7:00 p.m. at Giant Center.

Wilkes-Barre/Scranton’s next home game is Saturday, Nov. 5, also against Hershey. Next Saturday’s game is also WWE Night, featuring a VIP Meet & Greet with WWE Superstar Johnny Gargano. Fans who wish to purchase tickets to the game and the Johnny Gargano VIP Meet & Greet can visit this link. Game time will be 6:05 p.m.