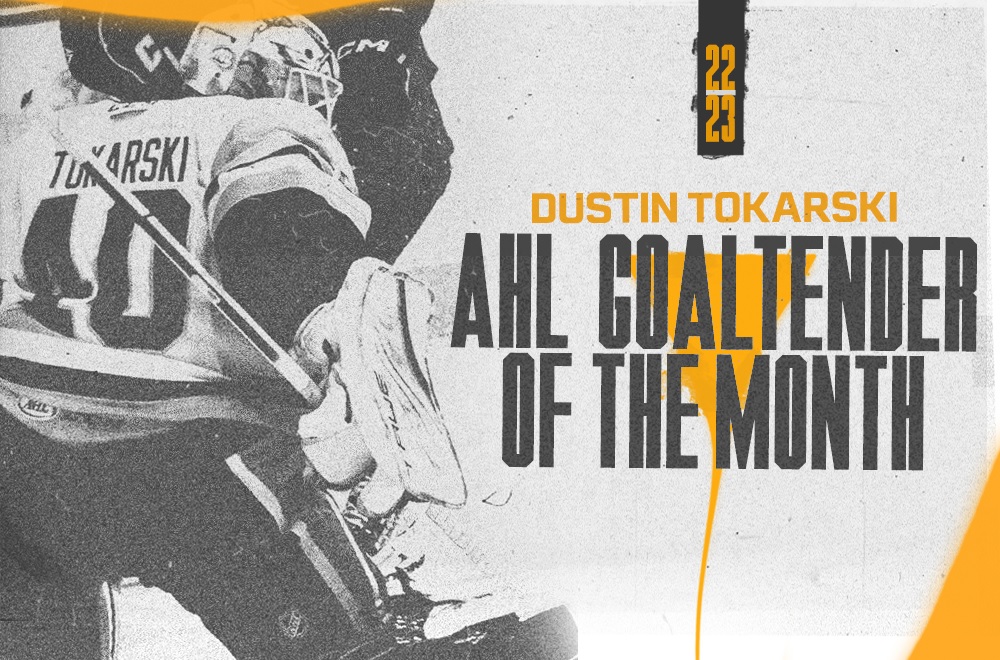 Tokarski posted a 4-0-1 record in the first month of the 2022-23 season and only allowed seven goals in those five games. His 1.38 goals against average leads all AHL goalies, whereas his .949 save percentage ranks third.

The 33-year-old pro started his 14th season of pro hockey pro by making 19 saves on Oct. 15 (opening night), but was handed an overtime loss by the Lehigh Valley Phantoms.

Tokarski responded with a 26-save effort in a win against the Laval Rocket on Oct. 21, a game in which the only puck that got through him came during a six-on-four power play. In his next three starts, he turned away 84 of 87 shots faced, securing victory for the Penguins in each of those contests.

At one point during the month, Tokarski played 179:59 without allowing a goal at five-on-five.

This is the second consecutive season that a Wilkes-Barre/Scranton netminder took home AHL Goaltender of the Month honors for October. Tokarski’s teammate, Filip Lindberg, won the award for October 2021.

A two-time Calder Cup champion, Tokarski rejoined the Pittsburgh Penguins organization as a free agent this summer after spending the 2021-22 season in the NHL with the Buffalo Sabres. The Watson, Saskatchewan native previously played for Wilkes-Barre/Scranton in the 2019-20 campaign.

Originally drafted by Tampa Bay in 2008, Tokarski has played 76 NHL games with the Lightning, Sabres, Montréal Canadiens and Anaheim Ducks.

Wilkes-Barre/Scranton’s next game is back on home ice against the Hershey Bears on Saturday, Nov. 5. Saturday’s game is also WWE Night, featuring a VIP Meet & Greet with WWE Superstar Johnny Gargano.

Fans who wish to purchase tickets to the game and the Johnny Gargano VIP Meet & Greet can visit this link. Game time is scheduled for 6:05 p.m. at Mohegan Arena at Casey Plaza.

Individual game tickets and season-ticket packages for the 2022-23 season are on sale now. Full-Season, 22- game, 12-game, Flexbook and Premium Seating plans are available by reaching out to the Penguins directly at (570) 208-7367.