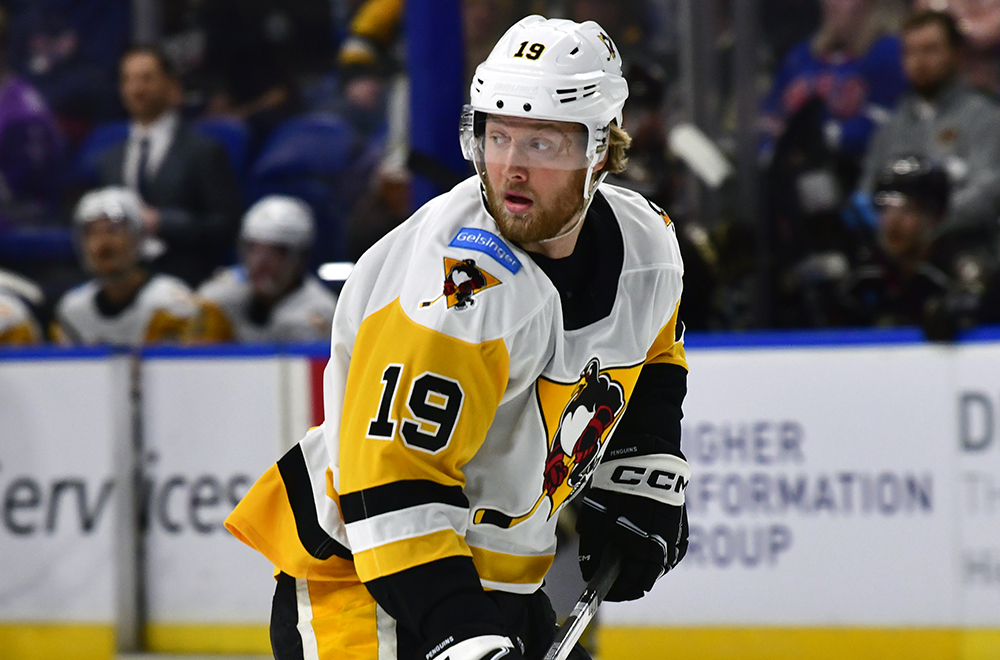 WILKES-BARRE, Pa. – The Wilkes-Barre/Scranton Penguins suffered their first regulation loss of the season, dropping a 2-1 decision to the Hershey Bears on Saturday night at Mohegan Arena at Casey Plaza.

Wilkes-Barre/Scranton (6-1-1-0) was held off the scoreboard until the last minute of regulation. At that point, the team made a frenzied attempt at a comeback and almost pulled it off. However, Hershey slipped away with the win.

The Penguins came out aggressive to start the first period, as they more than doubled the Bears’ shot output. Wilkes-Barre/Scranton built a 13-6 edge in shots, many of which came from point-blank range or were slick redirections at the net-front. The Penguins failed to capitalize on those opportunities, and so the game went into the first intermission knotted, 0-0.

The second frame saw a reversal of the first, as Hershey seized control of the contest. Mike Sgarbossa tallied first for the Bears, finishing a backdoor tap-in at 13:23 of the second period. Ethen Frank cashed in on their first power play of the game, giving Hershey a 2-0 lead with 90 seconds left in the middle frame.

The final period started with a bang, as Penguins forward Jonathan Gruden delivered a thundering hit to Bears defenseman Aaron Ness, which prompted Matt Strome to drop the gloves. Gruden connected with a heavy right before taking Strome to the ground.

Hershey did its best to quell any energy Wilkes-Barre/Scranton could take from that fight, holding the Penguins at bay for most of the third period. Chances started to pile up as time wore on, but Bears netminder Zach Fucale stood his ground.

With their goalie pulled for an extra attacker, the Penguins finally got on the board with 55.9 seconds left in regulation. Alex Nylander secured his team-leading fifth goal of the year with a rifle shot from the high slot.

Wilkes-Barre/Scranton had a couple more cracks at Fucale and came close to tying the game twice, but Hershey survived the late-game surge.

Dustin Tokarski finished the game with 25 saves for the Penguins, while Fucale posted 30 saves on 31 shots.

The Penguins will get another crack at the Bears tomorrow, Sunday, Nov. 6, at Giant Center. Game time for the second game of this home-and-home set is slated for 4:30 p.m.

Wilkes-Barre/Scranton’s next home game is Friday, Nov. 11 when they welcome the Hartford Wolf Pack to Mohegan Arena at Casey Plaza. Puck drop for the Penguins and Wolf Pack is 7:05 p.m.

BLUEGER PLANS ON LEAVING A LASTING IMPRESSION AT TRAINING CAMP