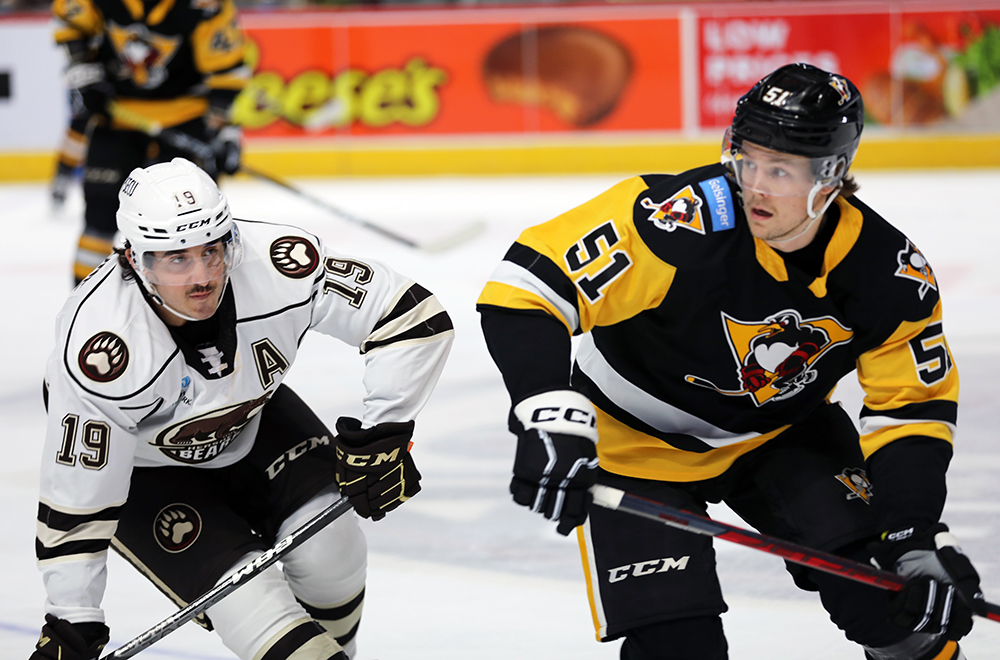 HERSHEY, Pa. – The Wilkes-Barre/Scranton Penguins rallied in the third period, but lost to the Hershey Bears, 4-3, on Sunday at Giant Center.

Wilkes-Barre/Scranton (6-2-1-0) scored three times in the final frame to claw its way back to a one-goal deficit. Filip Hållander led the charge, picking up a point on each of the Penguins’ third period goals (2G-1A).

The Bears built a 2-0 lead in the first period by taking advantage of a pair of Penguins miscues in the defensive zone. First, Shane Gersich scored at 12:54, followed by Mason Morelli lighting the lamp two minutes later.

The middle frame offered an opportunity for Wilkes-Barre/Scranton to turn things around, but instead, Hershey doubled its lead. Ethen Frank was the beneficiary of a lucky bounce, as his centering pass ricocheted off a Penguins defenseman and past goalie Filip Lindberg at 6:28 of the second period. Frank’s tally was quickly met with Henrik Rybinski’s first pro goal.

Down 4-0 at the start of the third, the Penguins wasted no time by finding the back of the net 14 seconds into the frame. Filip Hållander fed the puck to the slot for Jonathan Gruden, who notched his first goal of the season.

Hållander later swatted in a rebound midway through the third period, making it 4-2.

The Penguins were given a power play late in regulation, during which they pulled their goalie for a six-on-four, extra-attacker opportunity. During this time, Hållander buried another rebound for the Black and Gold, bringing his team within one with 1:22 left.

Unfortunately for Wilkes-Barre/Scranton, its rally stopped there, and Hershey narrowly escaped with the win.

Lindberg turned away 25 shots in defeat for the Penguins, while Bears goalie Hunter Shepard recorded 30 saves.

Wilkes-Barre/Scranton’s next game is back home on Friday, Nov. 11 when they welcome the Hartford Wolf Pack to town. Next Friday’s game is also an Eyewitness News Fan Friday. Select draft beers will be available for $2 from 6:00 – 7:30 p.m. courtesy of Coors Light.

Puck drop for the Penguins and Wolf Pack is 7:05 p.m. at Mohegan Arena at Casey Plaza.

PENGUINS GAME AT UTICA TO RESUME ON JAN. 24