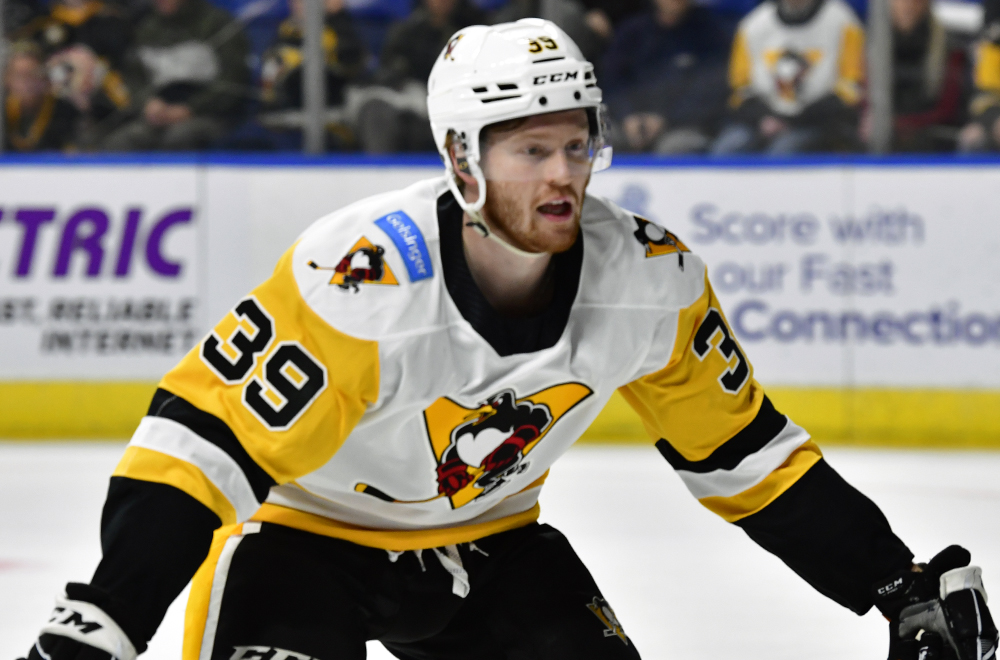 WILKES-BARRE, Pa. – The Wilkes-Barre/Scranton Penguins had a third-period comeback thwarted during a 3-2 loss to the Springfield Thunderbirds on Saturday night at Mohegan Arena at Casey Plaza.

Wilkes-Barre/Scranton (6-4-1-0) received excellent performances from its special teams, going six-for-six on the penalty kill and scoring a pair of power play goals when they were trailing in the final frame.

However, the comeback effort was undone by former Penguin Anthony Angello, who scored the game-winning goal against his old club at 7:43 of the third period.

The start to the match was a battle between the Thunderbirds’ power play and the Penguins’ P.K. with the latter prevailing twice. As a result, the game remained deadlocked, 0-0, heading into the first intermission.

The Penguins’ penalty kill turned away two more power play opportunities in the second stanza, but the T-Birds still managed to scored at full strength. Will Bitten and Dmitrii Samorukov both found the back of the net at 8:27 and 9:51, respectively.

Coming into the final frame down 2-0, things drastically swung in the Penguins’ favor when T-Birds defenseman Tommy Cross was hit with a four-minute, double minor for high-sticking. What followed was an electrifying sequence that saw Wilkes-Barre/Scranton tie the game.

First, Sam Houde buried his first goal of the year at 4:03 of the third period.

The momentum was short-lived though, as Angello capitalized on a two-on-one rush to reestablish Springfield’s lead, 3-2. The goal was Angello’s first as a Thunderbird.

The Penguins generated a season-high 21 shots on goal during the third period, but never found a way to tie the game.

Wilkes-Barre/Scranton’s next game is Friday, Nov. 18 when it welcomes the Hershey Bears back to Mohegan Arena at Casey Plaza. Next week’s game is also another Eyewitness News Fan Friday, featuring $2 select draft beers on sale from 6:00 – 7:30 p.m. courtesy of the PA Prostate Cancer Coalition.

The Penguins and Bears are scheduled for a 7:05 p.m. puck drop.