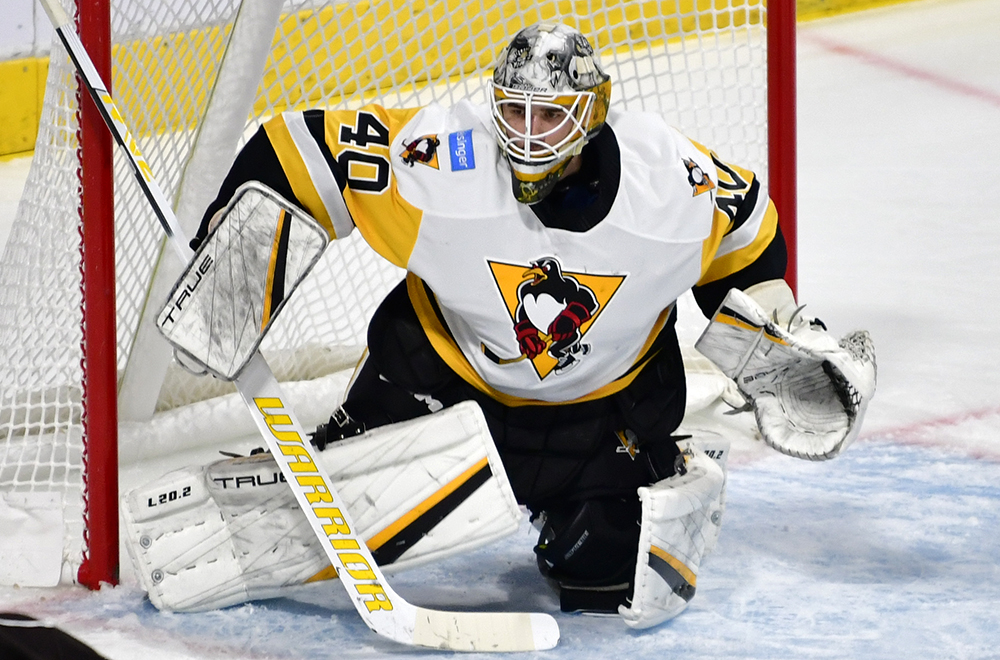 WILKES-BARRE, Pa. – Dustin Tokarski recorded his first shutout of the season, as the Wilkes-Barre/Scranton Penguins earned a 4-0 win over the Hershey Bears on Friday night at Mohegan Sun Arena at Casey Plaza.

Wilkes-Barre/Scranton (7-4-1-0) snapped Hershey’s six-game winning streak thanks to contributions from four different goal-scorers and the performance by Tokarski.

Tokarski, who earned his 28th career shutout and 198th career win, leads the AHL with a 1.38 goals against average and .948 save percentage.

The Penguins opened the scoring when Drake Caggiula notched his first goal as a Penguin 4:16 into the game.

Their 1-0 lead persisted through both intermissions, and then the final frame quickly presented the Penguins with some adversity. The Penguins were hit with back-to-back penalties, putting them on the penalty kill for close to four minutes straight and giving the Bears a brief two-man advantage. Wilkes-Barre/Scranton passed this test with flying colors, holding Hershey to just two shots on both power plays.

With the P.K. in the rearview mirror, the Penguins exploded for three goals in the final 10 minutes. Jonathan Gruden started the frenzy when he lit the lamp at 13:46 of the third period. Less than two minutes later, Sam Houde buried a one-timer on a two-on-one rush, running Wilkes-Barre/Scranton’s lead to 3-0.

Filip Hållander nabbed an empty-net goal after the Bears pulled their goalie for an extra attacker, cementing the Penguins’ win.

Catch Tokarski Again at Your Next Penguins Game

The Penguins’ next game is tomorrow, Saturday, Nov. 19, when they travel to Connecticut to take on the Bridgeport Islanders. Puck drop between the Isles and Penguins is scheduled for 7:00 p.m. at Total Mortgage Arena.