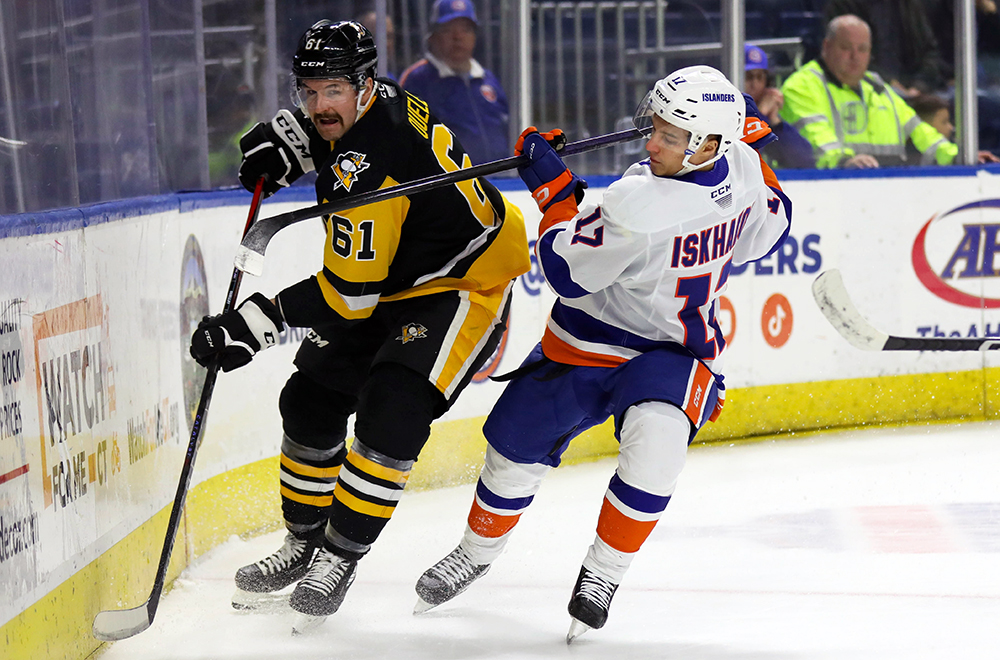 Wilkes-Barre/Scranton (7-5-1-0) found the back of the net in the first and second periods, but was foiled by the post four times throughout the course of the game. The Islanders utilized their power play to stay in the game before pulling away in the third period.

The Penguins drew first blood by cashing in on the man advantage at 5:32 of the opening frame. Ty Smith rifled a shot through traffic that whizzed past Bridgeport goalie Cory Schneider.

Valtteri Puustinen struck iron on a one-timer later in the first period, but their one-goal lead remained intact going into the first intermission.

Bridgeport converted on its third power play of the game with a goal from William Dufour five minutes into the second period.

Drake Caggiula appeared to reestablish Wilkes-Barre/Scranton’s lead with a snipe from the high slot, but video review determined that the puck struck the crossbar and never fully crossed the line.

Sam Poulin left no doubt when he buried on a breakaway with three minutes left in the second stanza. However, Bridgeport promptly tied the game with another power-play goal before the second intermission arrived. This time, it was Otto Koivula doing the honors, tying the game at 2-2.

The Islanders seized their first lead of the night at 4:27 of the final frame on a long-distance shot from Kyle MacLean. The Penguins hit the post two more times, but couldn’t light the lamp again. Parker Wotherspoon sealed Bridgeport’s victory with an empty netter in the final minute of regulation.

Schneider wrapped up the win with 30 saves, while Penguins netminder Filip Lindberg turned away 26 of the 29 shots he faced.

Look Forward to the Next Wilkes-Barre/Scranton Game

The Penguins will travel from Connecticut to North Carolina for their next game on Monday, Nov. 21 against the Charlotte Checkers. Game time between the Penguins and Checkers is slated for 7:00 p.m. at Bojangles’ Coliseum.