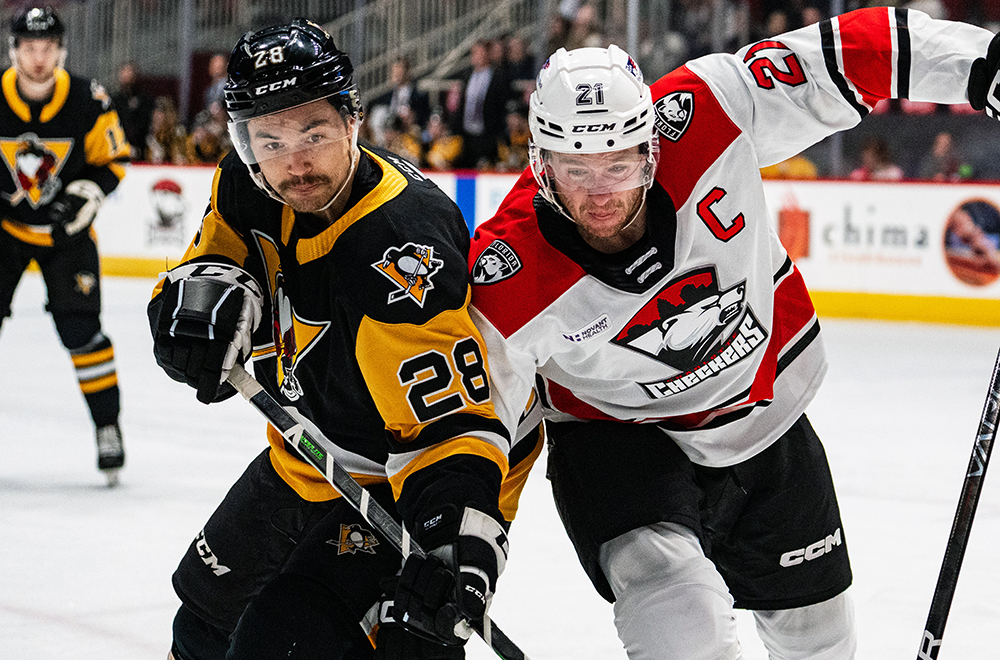 CHARLOTTE, N.C. – The Wilkes-Barre/Scranton Penguins fell in a barnburner to the Charlotte Checkers, 5-4 in the shootout on Monday night at Bojangles’ Coliseum.

Wilkes-Barre/Scranton (7-5-1-1) played at a breakneck pace all night, particularly in the third period when the game was at its most tense. After a tie score at the end of regulation and overtime, Grigori Denisenko delivered the decisive goal for Charlotte in the shootout’s fourth round.

Filip Hållander pulled the Penguins even, 1-1, on a power-play goal at 12:57. When the Checkers had a chance to respond with their first man advantage, the Penguins swooped in and turned the tables. Jonathan Gruden picked off a seam pass in the Wilkes-Barre/Scranton zone and then accelerated up ice for a shorthanded goal at 16:03.

Alex Nylander ran the Penguins’ lead to 3-1 with another deflection goal, this one occurring at full strength four and a half minutes into the second stanza.

With everything going Wilkes-Barre/Scranton’s way, Charlotte dramatically swung the momentum back in its favor with a pair of quick tallies in the middle frame. The Checkers used Patrick Giles’ first pro goal and a man-advantage marker from Aleksi Heponiemi to erase the two-goal deficit and make it a 3-3 hockey game going into the second intermission.

Wilkes-Barre/Scranton reestablished its lead, 4-3, on an early third-period, power-play goal from Drew O’Connor. O’Connor curled out from behind the opposing net and then launched a shot through Alex Lyon’s equipment to the Charlotte goalie’s short side.

Both teams traded grade-A scoring chances throughout the third period, with both Lyon and Dustin Tokarski answering with sparkling saves. Tokarski appeared to be unsolvable in the final frame of regulation until Denisenko found the back of the net during a five-on-three power play. Denisenko’s tying goal arrived with 5:41 left in regulation.

Neither side could score in overtime or in the first three rounds of the shootout. Penguins shooter Drake Caggiula hit the post on his fourth-round attempt, giving way for Denisenko to pot the game-winner.

Tokarski was given the overtime loss despite making 36 saves in regulation and overtime. Lyon recorded 32 saves before turning away all four Wilkes-Barre/Scranton shootout attempts.

The Penguins have a rematch with the Checkers on Wednesday, Nov. 23. Puck drop for the Pens and Checkers is slated for 7:00 p.m. at Bojangles’ Coliseum.