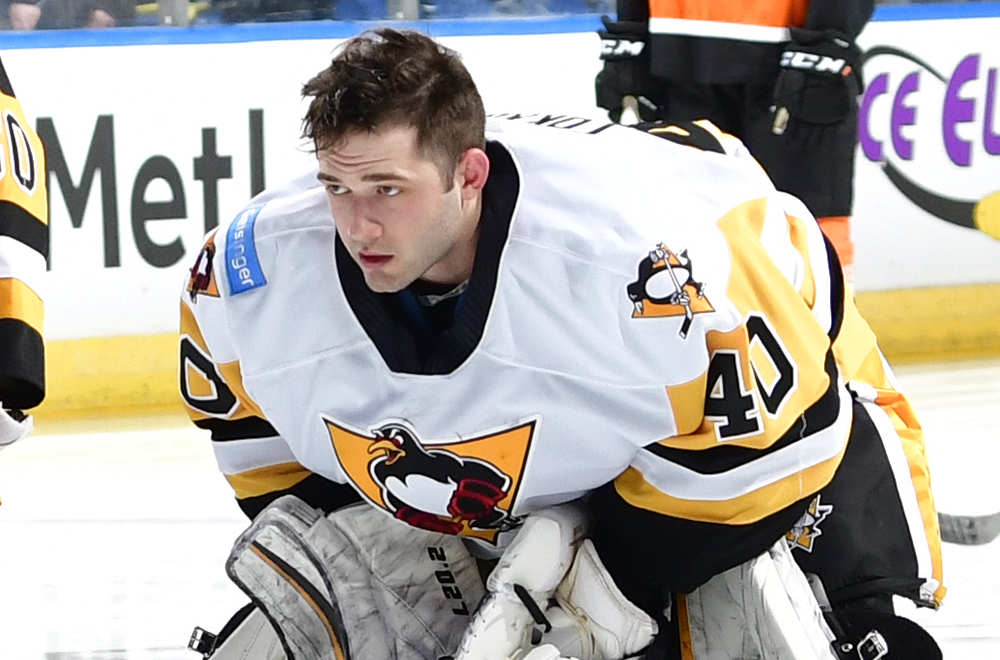 Tokarski became the 16th goaltender in league history to achieve 200 career wins as the Wilkes-Barre/Scranton Penguins defeated the Lehigh Valley Phantoms, 3-2, in a shootout on Friday night at Mohegan Sun Arena at Casey Plaza.

Wilkes-Barre/Scranton (9-5-1-1) came from behind in the last seven minutes of regulation to force overtime, including a shorthanded goal with time ticking down. Tokarski made 32 saves in 65 minutes of work and did not allow a goal in the three-round shootout.

Lehigh Valley notched the first goal of the night when Tyson Foerster tipped in a point shot at 13:33.

In the middle frame, Drake Caggiula was set up for a prime chance, but he hit the post. The opportunity was followed by a seven-shot barrage by the Penguins in the final 1:49 of the second period.

However, Lehigh Valley netminder Pat Nagle weathered the storm and kept the Phantoms ahead, 1-0.

Elliott Desnoyers dampened the mood by scoring on a wraparound midway through the third period, giving Lehigh Valley a 2-0 edge. But the Penguins weren’t dead yet.

First, Valtteri Puustinen got Wilkes-Barre/Scranton on the board with 6:47 left in regulation.

Hope was all but dashed when the Penguins were assessed a penalty with under three minutes to go, but a Phantoms turnover gave way to a shorthanded tally from Caggiula. Caggiula’s clutch goal tied the game, 2-2, with 2:01 remaining.

The Penguins were awarded a power play in overtime, but did not find the back of the net.

Alex Nylander tucked in the lone goal of the shootout on a beautiful backhand deke, and Tokarski held firm on his end to log the milestone victory.

Nagle recorded 33 saves through regulation and overtime and turned away two of the three shootout bids he faced.

Catch Tokarski at the Penguins’ Next Game Against the Springfield Thunderbirds!

Wilkes-Barre/Scranton quickly hits the road for its next game tomorrow, Saturday, Nov. 26, against the Springfield Thunderbirds at MassMutual Center. Puck drop is scheduled for 7:05 p.m.

The Penguins’ next home game is next Saturday, Dec. 3 against the Bridgeport Islanders. That night will feature pre-game ceremonies for the induction of Tom Kostopoulos, Tom Grace and Steve Barrouk into the Wilkes-Barre/Scranton Penguins Hall of Fame. Game time is currently slated for 6:05 p.m.