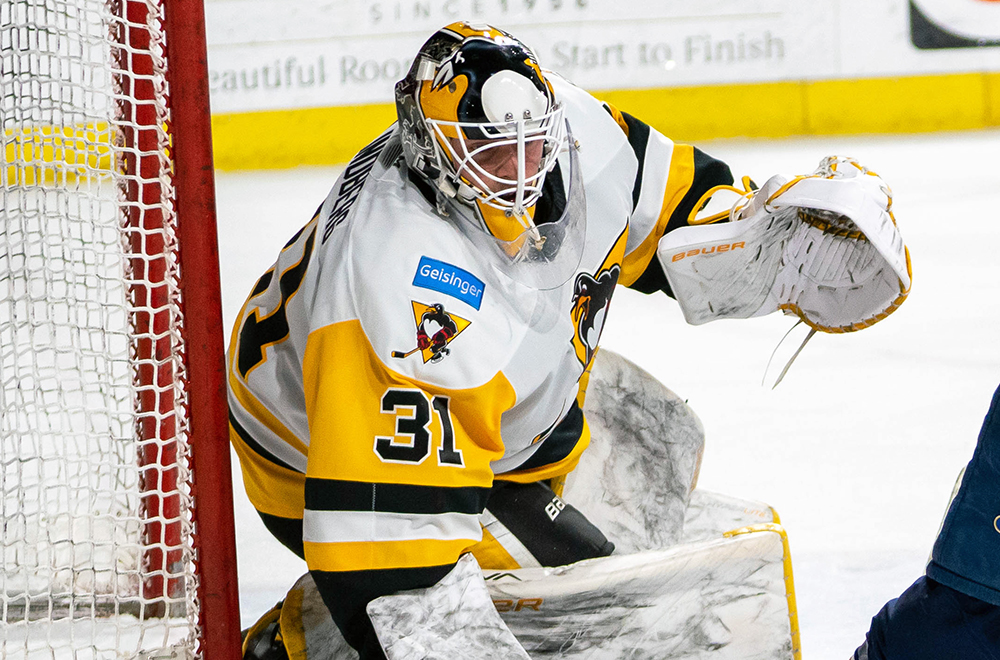 SPRINGFIELD, Mass. – The Wilkes-Barre/Scranton Penguins made another late-game comeback and scored a 3-2, shootout win over the Springfield Thunderbirds on Saturday night at MassMutual Center. For the second night in a row, Wilkes-Barre/Scranton Pens (10-5-1-1) tied the game in the final minutes of regulation and defeated a division rival by a 3-2 score. Alex Nylander and Sam Poulin both tallied in the shootout to secure the team’s third win in a row.

A back-and-forth first period ended with Springfield carrying a 1-0 lead into intermission. Hugh McGing found the back of the net for the game’s first goal with just 37.7 seconds remaining in the opening frame.

Poulin tied things up with a redirection of Jon Lizotte’s slap shot at 13:31 of the second period. However, Springfield utilized another late goal to retake the lead. Will Bitten notched a power-play marker with only 2.7 seconds left before the second break.

The Pens knotted the score at two goals apiece when a plucky effort from Valtteri Puustinen allowed him to blow past the T-Birds’ defense before slipping the puck through Joel Hofer’s five hole. Puustinen’s tying tally came with 3:05 left in regulation.

The game stayed even through a five-minute overtime, so onto the shootout they went. Springfield defenseman Dmitrii Samorukov opened the first round with a goal, but he was promptly answered by Nylander. After a pair of saves from Filip Lindberg, Poulin had a chance to secure the win for Wilkes-Barre/Scranton in the third round. Poulin juked around Hofer’s poke check and closed the game with a backhand shot.

Lindberg recorded 32 saves through regulation and overtime, plus his two stops in the shootout. Hofer only made one save in the shootout, but did turn away 40 shots in four periods of work.

Catch the Pens Next Game Against the Hershey Bears

Wilkes-Barre/Scranton’s next game is against its bitter rival, the Hershey Bears. The two Keystone State rivals are set to face-off at Giant Center on Tuesday, Nov. 29 at 7:00 p.m.

The Pens’ next home game is next Saturday, Dec. 3 against the Bridgeport Islanders. That night will feature pre-game ceremonies for the induction of Tom Kostopoulos, Tom Grace and Steve Barrouk into the Wilkes-Barre/Scranton Penguins Hall of Fame. Game time is currently slated for 6:05 p.m.