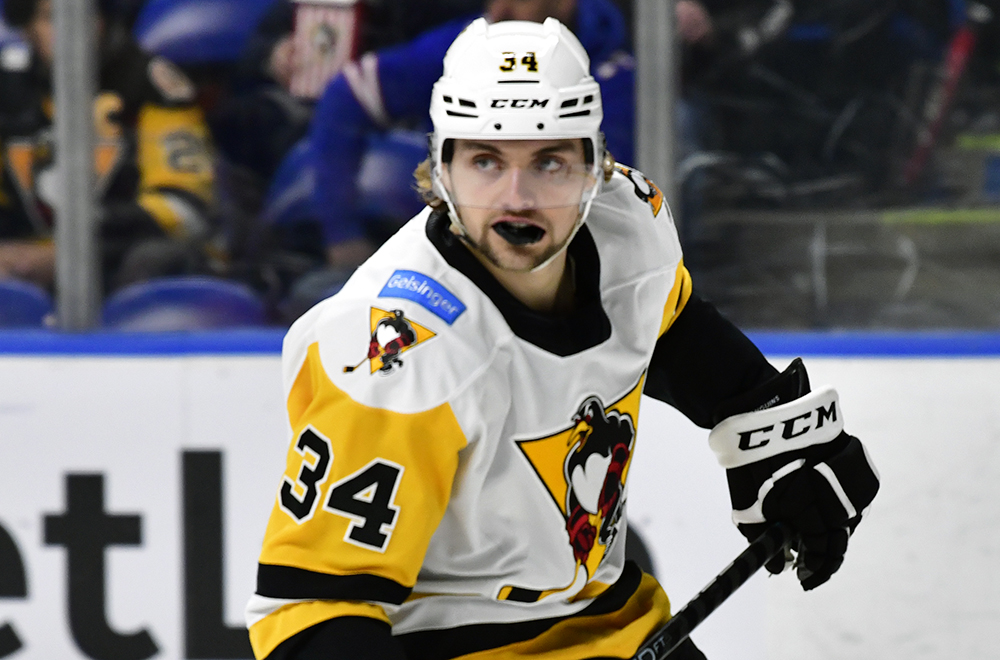 WILKES-BARRE, Pa. – The Wilkes-Barre/Scranton Penguins lost to the Bridgeport Islanders, 5-1, on Saturday night at Mohegan Sun Arena at Casey Plaza.

Prior to the game, Wilkes-Barre/Scranton (10-6-1-2) honored its three newest inductees to the team’s Hall of Fame: Steve Barrouk, Tom Grace and Tom Kostopoulos. The pre-game ceremony featured video tributes, loud ovations and a banner unveiling for the trio. Unfortunately, the crowd did not get the chance to roar again until Nathan Légaré scored the Penguins’ lone goal in the third period.

The game started at a stalemate and remained tied, 0-0, after the first period. The second period was where the Islanders got their offense going.

Ruslan Iskhakov notched the game’s first goal at 1:47 of the second frame, followed by a Collin Adams tally a minute and a half later. Andy Andreoff made it 3-0 midway through the period, and the Isles carried that three-goal lead into the second intermission.

Bridgeport received an early, third-period power-play goal from William Dufour to make it 4-0. Then Chris Terry wrapped up a three-point night (1G-2A) by batting in a deflected puck at 11:44 of the final frame.

Légaré scored for the second game in a row and spoiled Cory Schneider’s shutout bid with 5:21 left in regulation. Schneider still finished the game with 32 saves on 33 shots faced.

Don’t Miss the Penguins Next Game

Wilkes-Barre/Scranton’s next game is tomorrow, Sunday, Dec. 4, a visit to Giant Center to take on the Hershey Bears. Game time for the Penguins and Bears is slated for 3:00 p.m.

The Penguins’ next home game is Friday, Dec. 9, when they welcome the Cleveland Monsters for an EYEWITNESS NEWS FAN FRIDAY at Mohegan Sun Arena at Casey Plaza. Like all Eyewitness News Fan Fridays, select draft beers will be on sale from 6:00-7:30 p.m. Puck drop for the Penguins and Monsters is 7:05 p.m.