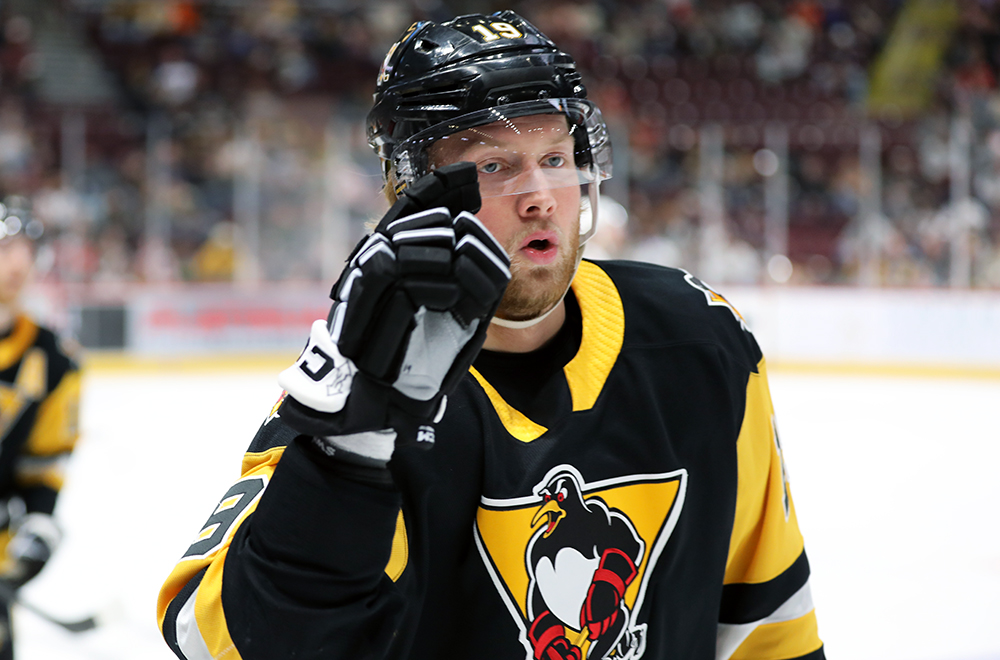 HERSHEY, Pa. – The Wilkes-Barre/Scranton Penguins used a second-period outburst to secure a 7-3 win over the Hershey Bears on Sunday afternoon at Giant Center.

Wilkes-Barre/Scranton (11-6-1-2) scored five goals in seven minutes during the second period to flip a one-goal deficit into a commanding lead. Seven different Penguins lit the lamp throughout the course of play, but Drew O’Connor led the team’s offense with four points (1G-3A).

The scoring started early, as Sam Anas kicked things off for Hershey 79 seconds into the game.

Filip Hållander tied things up, 1-1, with a determined effort midway through the first period.

Hendrix Lapierre and Alex Nylander traded power-play goals to keep the game even, but Mike Sgarbossa put the Bears back on top, 3-2, with 2:35 left in the opening frame.

Once the second period began, Wilkes-Barre/Scranton took over and didn’t look back.

First, Valtteri Puustinen scored on the power play 42 seconds into the frame. Less than a minute later, Mitch Reinke tallied his first goal of the season and gave the Penguins their first lead of the day. Thirty-three seconds after that, O’Connor sniped the top corner and made it 5-3.

Jonathan Gruden and Tyler Sikura also picked up goals at 3:36 and 7:49, respectively, stunning the crowd at Giant Center and forcing Bears starting goalie Zach Fucale to the bench.

Fucale’s day ended early after making 14 saves on 21 shots faced. He was replaced by Justin Kapelmaster, who turned aside all 10 shots thrown his way.

Penguins netminder Filip Lindberg picked up the win with 21 stops.

Catch the Penguins Next Game on December 9th!

Wilkes-Barre/Scranton’s next game is Friday, Dec. 9, when they welcome the Cleveland Monsters to Mohegan Sun Arena at Casey Plaza for an EYEWITNESS NEWS FAN FRIDAY. Friday’s game will feature select draft beers on sale from 6:00-7:30 p.m. Puck drop for the Penguins and Monsters is 7:05 p.m.