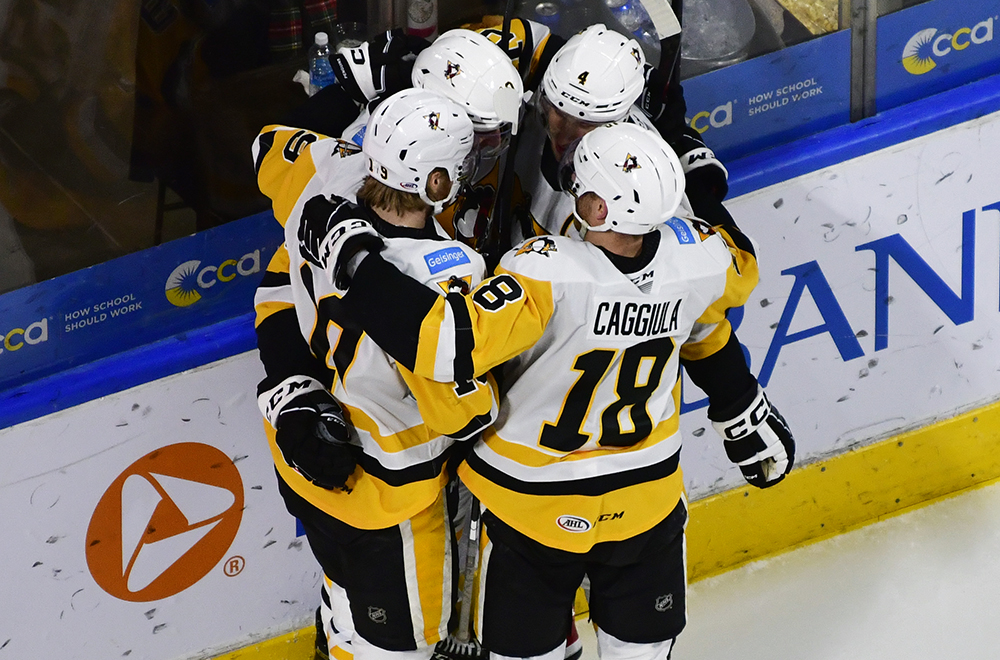 WILKES-BARRE, Pa. – The Wilkes-Barre/Scranton Penguins dominated the Cleveland Monsters to the tune of an 8-1 win. It happened on Friday night at Mohegan Sun Arena at Casey Plaza. Following up a seven-goal outing on Sunday, Wilkes-Barre/Scranton (12-6-1-2) established a new franchise record for most goals in consecutive games. They did this by generating 15 total tallies in its last two contests. Drew O’Connor paced the Penguins’ offense in both of those wins, including a career-high five points (2G-3A) in Friday’s Monster mash.

How Did the Game Go?

The Penguins’ penalty kill prevailed against the league’s top power play unit on two man advantage opportunities in the first period and kept the game tied at 0-0. That is, until Nathan Légaré capitalized with just five seconds remaining left in the opening frame, giving the Penguins a 1-0 lead.

Wilkes-Barre/Scranton’s second period dominance started with O’Connor launching his first goal of the evening 50 seconds into the stanza. He then lit the lamp again at 3:41 of the middle frame.

Corey Andonovski found the back of the net with a top-shelf snipe at 5:27, giving the Penguins three goals in under five minutes of game time during the middle frame.

Drake Caggiula and Alex Nylander both scored at 11:36 and 17:45 of the second period, respectively, granting Wilkes-Barre/Scranton a five-goal cushion.

Mayhem at Mohegan continued as the Penguins tallied a pair of power-play goals in the third period. First, Jonathan Gruden banged in a backdoor feed four and a half minutes into the final frame, followed by Valtteri Puustinen scoring his team-leading ninth goal of the season five minutes later.

Cleveland notched its lone goal early in the second period when Justin Richards swept in a rebound after Penguins goalie Filip Lindberg had initially made a stellar save on Tyler Angle. Despite being foiled by Richards, Lindberg still finished with a career-best 36 saves.

Monsters starting netminder Daniil Tarasov was pulled after making 12 saves on 17 shots faced. He was replaced by Jet Greaves, who turned away 14 of the 17 shots thrown his way.

The Penguins’ P.K. finished the night 5-for-5 against the Monsters’ No. 1-ranked power play.

Wilkes-Barre/Scranton’s next game isn’t until next Friday, Dec. 16, against the Hershey Bears. Next Friday’s rivalry game is also another Eyewitness News Fan Friday, featuring select draft beers on sale for $2 from 6:30 – 7:30 p.m. Puck drop between the Penguins and Bears is slated for 7:05 p.m.